Glen Canyon NRA, Utah – May 2015 Lake Powell had been on my must see list since reading a blog a few years ago about a kayaker paddling its slot canyons. Fortunately it was also the warmest destination in Utah so that is where I set my sights. I found a campground near its southern end that looked promising called Lone Rock. It was a beach with no designated campsites so you could set up anywhere you could find an open spot. Everything I read said it was free but when I arrived I found you are supposed to pay $10 per night but there wasn’t anyone around most of the time to collect it or enforce it.

The view from my front door was lovely and I enjoyed it so much I stayed for 10 days.

The weather was mid 70s and sunny most days. This was plenty warm enough to get wet and the lake water was clear and inviting. I kayaked out around Lone Rock my first day and explored the shoreline beyond. I discovered a cove that just kept going with many twists and turns creating many private lagoons, a couple with nice beaches. I made plans to return later in the week with all the provisions for a private beach party.

I set out the next Wednesday morning loaded up with lunch, a few adult beverages, a beach chair, and music. There were a few other people in the area and my location of choice was occupied when I got there. But I found another even better spot a little farther inside the cove. Here is a shot of it from the rocks above. 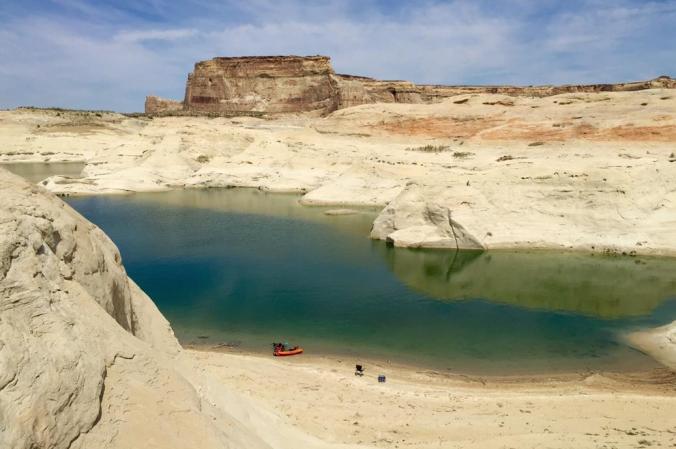 Within an hour the other parties (two kayakers, a jet skier, and a paddleboarder) had explored to their heart’s content and departed. I didn’t see another soul the rest of the day. I enjoyed the rare solitude until my beverages were gone and I had a pink hue.

One afternoon I drove 30 miles west to a place I had seen on my way in called Toadstools. It is on the very edge of the Grand Staircase Escalante National Monument. It’s an easy hike of a couple miles to an area that has many toadstool shaped hoodoos. This is a picture of the main formation of them but there are many others scattered behind them and on the ledge above.

I noticed not much further west of Toadstools and still inside the national monument the map said “Paria ghost town”. It was 6 miles from the highway on a very well maintained gravel road. It turned out it was actually the site of an old town and later the site of a Hollywood movie set where several movies were filmed. Both the real town and the set built nearby could not withstand the constant flooding of the Paria River that flowed past, and too often through, the area. I was disappointed not to find any remains at all of either; not a single board, piece of rusted metal, or pile of rock.

But the scenery more than made up for my disappointment. The view of these mountains was stunning. You could clearly see every layer of rock, each with its own vivid color. My favorite layer was a beautiful purple color. I wish I could have taken a picture that did them justice. But this is the best I was able to do.

I didn’t realize until later that these distinctive layers of rock are the grand staircase they are referring to in the name of the national monument. I was grateful to have accidentally included it in my itinerary.