Colorado River below the Glen Canyon Dam, Arizona– May 2015

I was enjoying my camp on Lake Powell in Utah very much but I’m really a river person at heart. So I drove a little south into Arizona, over the dam that created Lake Powell, and looked down at the Colorado River emerging on the other side of the dam. I then drove a bit further and walked a half mile to the viewpoint for Horseshoe Bend 6 river miles from the dam. 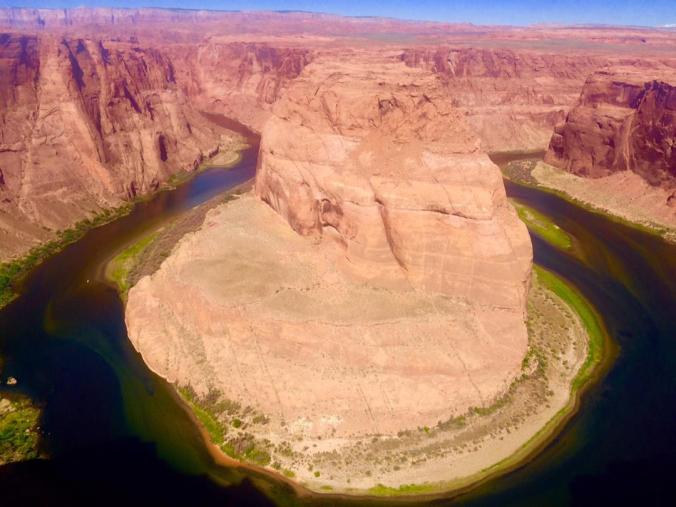 It did look like an amazing portion of the Colorado. So I drove to the only public access point below the dam for several hundred miles called Lee’s Ferry. It was only another 9 river miles but 40 miles by road. The water was crystal clear but at less than 50 degrees it hurt to put your feet in it for more than 30 seconds so swimming was out of the question.

This area is considered the beginning of the Grand Canyon. Because it is the last access point before the canyon and where outfitters put in for their river excursions through the canyon. Soon after Lee’s Ferry the canyon walls close in around you and the only way out is to float on through or climb out. I hope to raft through the Grand Canyon someday but for now I was more interested in the 15 miles of river between the dam and this takeout.

I put in at Lee’s Ferry to see how far I could kayak up river. The output from the dam was high that day so there was a healthy current. The winds were also against me but I managed to paddle for three miles to this beautiful spot mostly by staying in the shallows along the edge.

As I was floating back to my truck I saw several big blue rafts that take sightseers for an hour long raft ride down this section. They had dropped their passengers off at Lee’s Ferry and they had kayakers loaded on and were hauling them up the river. I made a note of the company’s name, Colorado River Discovery (CRD), and called them the next day to make a reservation. They charge $25 per person, $22 per boat, and $25 for gear in excess of 50 pounds. They only take 8 passengers at 2 pm every day. I was able to make a reservation for early the next week.

I arrived a couple hours early on the day of my reservation. I had watched some of the Grand Canyon outfitters load passengers on their huge rafts during my last visit. It was later in the day this time and I had seen 4 rafts full of passengers float under the bridge 10 miles downstream when I stopped to have lunch. I couldn’t help thinking “how did they find 120 people that could spend $2800 to go camping for a week?” Now the outfitters were loading 2 big rafts with supplies from a semi-truck. There were so many boxes but the ones that stood out read Pabst, Budweiser, Corona. I think every beer was represented there. When you consider the amount of food and manpower (and don’t forget BEER) necessary to comfortably transport passengers through the canyon I realized $400 per day was probably fair.

While waiting I met 4 other paddlers that were waiting for a ride upriver that day, a Texas couple around 30 on a week’s vacation without the kiddos and another couple, 20ish from Phoenix celebrating the young lady’s birthday. CRD’s rafts arrived on time and unloaded their passengers and we all pitched in and helped load each other’s gear onto three of their rafts and were off. It took almost an hour to raft upstream. We chatted with the girl who drove the raft. She was about 20 and I was surprised to learn the job didn’t require any special training and was relatively easy to obtain. She pointed out the campsites that were available to us and other points of interest along the way before dropping us at a tiny beach just below the dam. 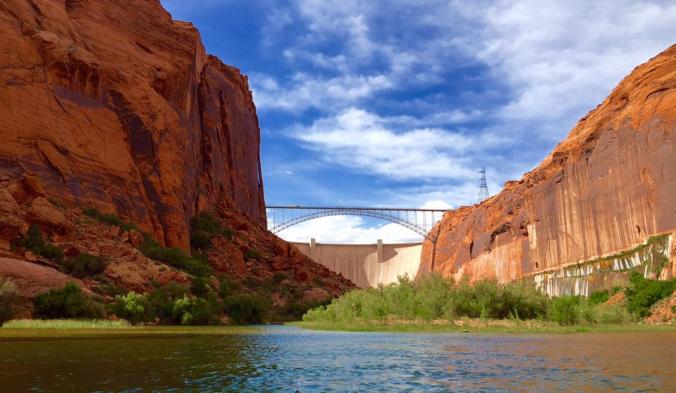 I planned to cover between 3 and 6 miles between being dropped off and making camp for the night. I had read there were 6 campsites available to campers on this section (turns out there were only 3). I thought I’d be happy with any of the first 4 as long as they offered solitude and a decent tent site. The other floaters seemed to feel the same. As soon as we got on the water a cold wind hit us. It was fierce and although there was a reasonable current you still had to paddle hard to get down river. We passed the first campsite after about a mile. It had no beach or gravel bar at all. You had to carry all your gear and your boat up a steep sandy path. After another couple of miles of grueling wind we reached the second campsite. The sun was setting fast in the canyon and it appeared everyone had had enough. No one was interested in going a few more miles to the next site. Solitude be damned!

There were two fire rings at this site. And there was a couple already camped at one. There were a few possible sites in some trees but the bugs got really bad away from the water. The two couples I rode up with shared a sandy area near the second fire ring and invited me to join them but I chose a clearing in the grass between them and the beach. I’m sure it was not what any of us had in mind when we started this adventure but everyone seemed happy to be out of the wind, setting up camp, and getting dinner ready. After dinner I took a walk and met the 4th couple. They had spent two days kayaking up to the dam under their own power. They had a tandem kayak with pedals and had often got out and pulled the kayak along from the bank. They had peddled, paddled, and ported the entire 15 miles to the dam before starting the float back just before we were dropped off. I was impressed!

The night was colder than I anticipated. I was grateful I had packed an extra layer of clothing because the blanket I brought was not enough and I got up and put on more clothing during the night. I had been unable to stay awake much past sunset the evening before but when the cold woke me at 2 am I couldn’t help but take a look outside and was pleased to find the night sky of my dreams. I took a short walk to the beach and sat under a billion stars for almost an hour marveling at the Milky Way clearly visible in the moonless sky.

The next morning I woke up anxious for the suns warmth and ready to start the day. After an hour cooking a warm breakfast and packing up camp I set off on the river. I enjoyed a near perfect day floating the last 11 miles. Horseshoe bend wasn’t nearly as dramatic from the perspective of the river, but still pretty.

I didn’t experience any more head wind until the last mile or so. I got back to Lees Ferry early in the afternoon and made the hour long drive back to my camp at Lake Powell.