Crane, Oregon – Sept. 2015 We finally made it to Oregon but are still on the east side of it which doesn’t look much different from the last three states we visited. I was looking for a place to layover for a day when I stumbled upon Crystal Crane Hot Spring on my RV Parky camping app. It was only about 20 miles off my chosen route so I decided to give it a try. It seemed as good a place as I could expect to find in this region to stop for a day and celebrate Jim’s 55th birthday.

We didn’t have very high expectations since the reviews varied significantly. I believe the key to enjoying this traveling lifestyle (or any way of life) is to keep your expectations low. I don’t consider myself a pessimist, in fact, quite the opposite. But when I read reviews and people complain about a park like this one I believe it is often their fault for having such high expectations. Exactly what can they expect when they pay $20 per night for a water and electric sight and get 24 hour access to a pretty amazing natural feature thrown in?!

We had a wonderful experience! They have a pond about 70 feet in diameter with a nice bowl shape about 7 feet deep in the middle. The bottom is covered with tiny black pebbles that did not hurt our feet and if we shuffled our feet tiny bubbles came up producing an amazing effect. The hot water coming out of the earth was about 104 degrees and they directed some of it out a pipe and also let some cascade over rocks, presumably to let it cool off. If you wanted the hottest experience you could stand right in front of that pipe. If that was too hot for you just move further away. If you went to the other side of the pond the water was around 95 degrees.

We enjoyed the spring each morning and evening. Right after the sun set each evening a big full moon would rise.

The first evening there were probably a dozen or so people in the pond, half of which were 20 somethings that got a little rowdy. But the pond was so big it didn’t seem crowded and they didn’t really bother us. The next evening once the sun set we had the whole thing to ourselves.

We especially enjoyed grabbing a cup of coffee and slipping in the water to catch the sunrise. We were generally the first there and then a few others would join. The mornings were especially quiet. Just a few heads bobbing around a steaming dark body of water all facing east. It was almost religious.

During the one day that we spent in the area we drove around to check out the sights. There were not many. They did have a pretty cool French round barn nearby. It was built in the late 1800’s and used to break horses in the winter.

The architecture was interesting. I’m glad they’ve preserved it.

I wanted to take Jim out to lunch for his birthday and there were few options in the area. The staff at the hot spring suggested lunch at the Diamond Hotel. As far as I could see the “town” of Diamond consisted of this establishment alone which included a small store, the post office, and a bed and breakfast. 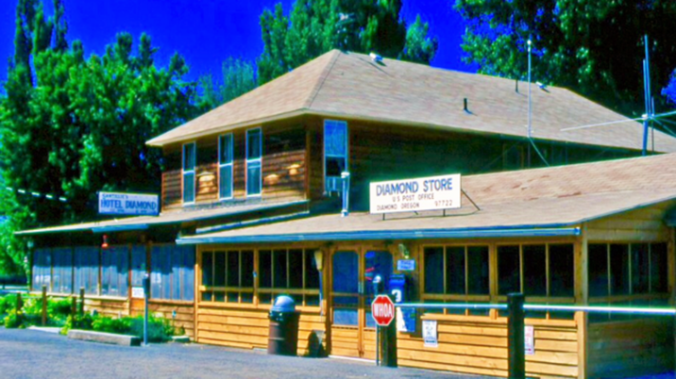 Once there we were directed to an entrance on the back side of the hotel which included two adorably rustic rooms with interesting old pictures and a few animal heads decorating the walls. We were the only people there for a while. I mean the ONLY people, I finally went in search of the kitchen and hailed some service. The cook came out and got us some drinks then later a waitress, the same person from the front of the hotel that directed us to the back door, came to take our food order. The food seemed to take forever as well but the humongous burger and plate full of fries were extremely good and made up for the wait.

Jim ended up having a great birthday and was rested the next day and ready to get us to western Oregon.