Crater Lake, Oregon – October, 2015 What a magical place Crater Lake is! And to think we almost missed it. By coming to Oregon so much later than we originally planned I thought we would have to pass on an item very near the top of our bucket list. After all it often snows at Crater by early October and we don’t do snow any more. But as we got nearer Jim pointed out that the weather was holding out pretty well. Lows were in the 30s but highs were sometimes reaching the 60s still.

We planned to pass through Bend, Oregon on our way through to the coast and Crater is only an hour and a half south of there. We debated several options. The main campground at Crater closed at the end of September but there seemed to be some boondocking options at Annie Creek snow camp. In the end we decided to stay near Bend which is at a lower elevation and enjoy slightly warmer nights, then make the 1 ½ hour drive to Crater to explore for one day.

Just before arriving in Bend the landscape changed dramatically. We had finally reached the part of Oregon that looked like we expected; BIG trees, lots of ’em, mostly evergreen. We enjoyed the drive to Crater early on a Thursday morning, arriving around 9 am. We spent the day driving the Rim Drive all the way around the lake.

Each pullout seemed to offer a more beautiful view than the last. And every time you thought the water couldn’t get any bluer, it did. Even from hundreds of feet up you could see the coastline under the incredibly clear water.

The day started out pretty overcast. The temperature stayed around 52 all day. When the sun was hiding behind the clouds it felt more like 30 and we kept adding layers but when the sun chose to shine, which it did for several hours around lunch, it felt more like 70 and we were stripping down to our t-shirts.

We walked the rim at Rim Village and visited the beautiful Crater Lake Lodge. 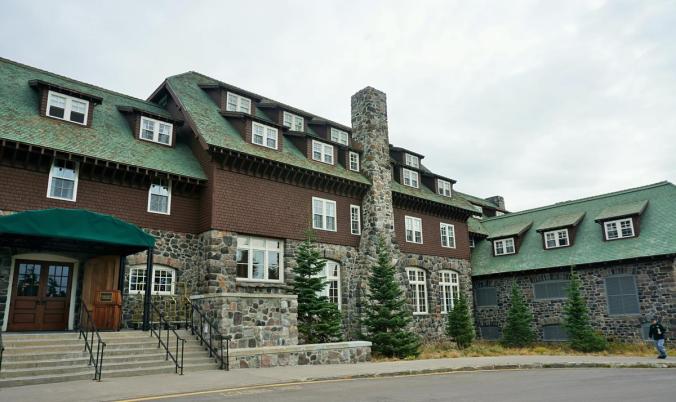 What a great place it would be to enjoy the sunrise. 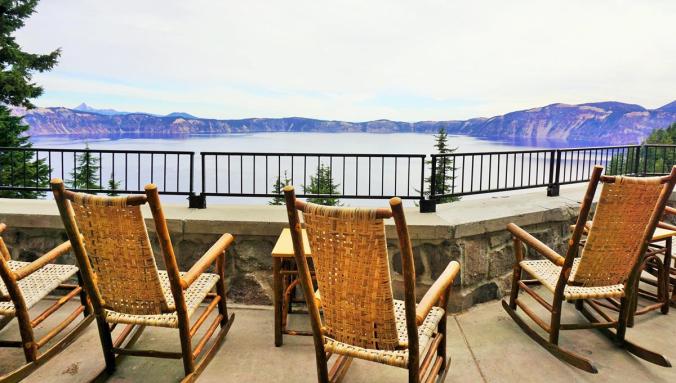 We ate the soup we’d brought for lunch among the pines then hiked the Sun Notch Trail for the best view of Shipwreck Island.

The park has been experiencing the worst fire in its history but it is now under control. We passed a forest of what looked like burnt toothpicks on the way in and we drove through a small amount of smoke. The signs say it will continue to burn until a good rain or heavy snow finally put it out. But it didn’t appear that the fire got anywhere near the rim. The views were stunning even when you were looking away from the lake. The mist in this pic is actually smoke.

We are so very happy that we didn’t miss this opportunity to visit Crater Lake. Sure we expect to visit again for a longer period of time someday. But life is unpredictable and if that opportunity eludes us we will still have some amazing memories of this day and beautiful photos to remind us of the experience.

In Bend we stayed at our first Thousand Trails campground. They now participate in Passport America so we got it for $28 per night. The sight was water and electric and offered pretty good privacy tucked in to the trees but we were expecting this previously members’ only campgrounds to be a little fancier. To be fair, it had a lot of amenities that we didn’t take advantage of including a heated outdoor pool and hot tub that were still open.

Since this first visit we have stayed at more Thousand Trails and discovered they are just like any other campgrounds, some have better sites and amenities and some are a bit rustic. We have since joined their club. They currently offer zone passes for only $550 per year and had a buy one zone, get one zone free deal. You get 30 days of free camping with your pass so as soon as you take advantage of that you just got 30 days of camping for only $18 per night. After that, you can camp an unlimited number of nights for $3 per night. I estimate we will use it at least 90 nights just this winter and expect it to save us over $1000 in lot rent during that time.

There are some rules that are designed to limit peoples’ use of the parks so that everyone has a chance to enjoy them. You can stay up to 4 nights at a park then move to another and continue to stay at various parks 4 nights at a time. Or you can stay at a park up to 14 days. But any time your stay exceeds 4 nights you have to stay out of the system for 7 nights before you can stay again. So you can stay in the parks 2 out of every 3 weeks if you’d rather not move often.

Even though we bought the pass in Oregon we were almost finished visiting the northwest so we chose the southwest and southeast zones so it includes pretty much the entire southern half of the US. I was assured I shouldn’t have any trouble getting reservations in California throughout the winter and so far I haven’t. I’m certainly prepared for the possibility that I might not always get into the park of my choice, especially on the weekends.