Morgan Hill to San Francisco, CA – Oct, 2015 We were excited to visit San Francisco but not so excited about the traffic. So we chose to stay outside of town at Morgan Hill Thousand Trails Campground. We had paid for a Thousand Trails zone pass as I explained at the end of my Crater Lake post and now had 30 days free camping so it wasn’t going to cost us anything more. We liked the campground. It was just a few minutes out of Morgan Hill, 25 minutes to San Jose, and an hour drive to down town San Francisco.

Jim suggested we use public transportation to get downtown and I loved the idea. The options were a little daunting and I am grateful I did extensive research on the internet before starting out or it could have been very frustrating. For instance, we would have liked to ride the BART train because it was cheaper but it sounded like parking near their stations was a nightmare. Caltrain came right through Morgan Hill but it turned out it only ran that far out on a very limited schedule. So we chose to drive to San Jose and catch it there. The roundtrip train tickets cost $18 each. We could then ride Muni busses for 90 minutes at a time for $2.25 each or Golden Gate Transit busses for twice that amount (they appeared to make less stops). So loaded with maps and notes and all our standard electronic devices we headed out.

We enjoyed the train ride in. It was interesting seeing the city from the tracks. We walked a couple blocks from the station and caught a bus to China town. At first the bus was almost empty but as we got nearer to our destination more and more people, mostly Asian, many elderly, got on. We happily gave up our seats to older folks. Every time the doors opened many more people got on a bus that I thought was already full. I don’t know how they all fit but they did. We were packed in the middle and couldn’t have gotten off if we wanted to. So we held on till our stop. The throng of people departed along with us and left the bus deserted. It was a fun, interesting experience. 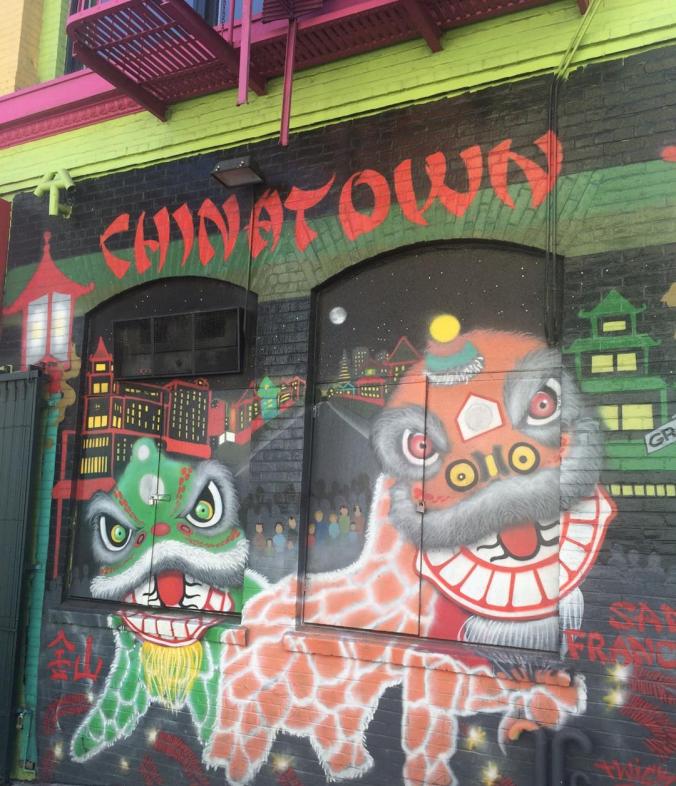 We walked up and down the streets of Chinatown for a while experiencing the very different sights and smells. We looked through gift shops at souvenirs and trinkets we had no use for. I wished we had made this our last stop as it was a veritable farmers market and I would have loved to take some produce home. But we didn’t buy a thing. Just soaked it all in and went away with a couple photos. 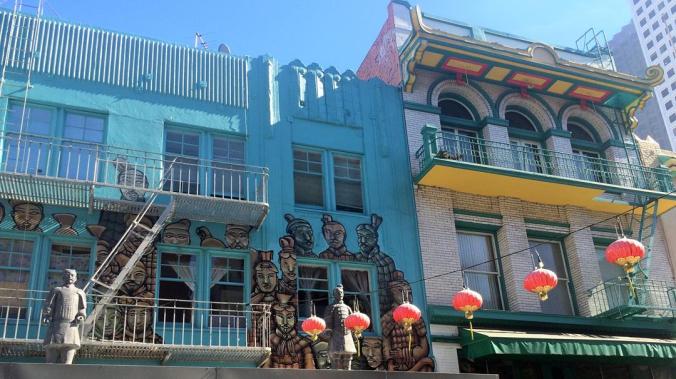 We caught a bus headed for the Golden Gate Bridge. We expected to have to change busses along the route. The first bus stopped before we planned to get off and said it was the end of the line. Thankfully we could almost see our next stop so we walked to it and waited for the bus which dropped us off at the visitor center for the bridge. 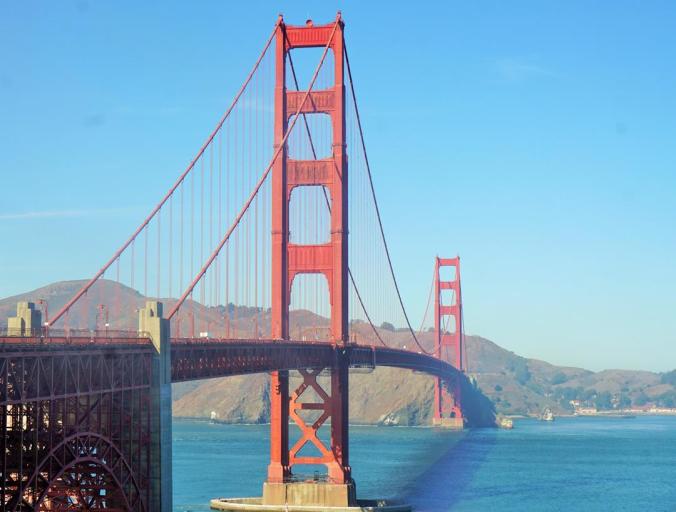 The Golden Gate Bridge was truly awesome! It’s about 2 miles across so we walked to the very center of it and back which made a great 2 mile walk. It was incredibly clear when we got there and the views of the bay and the city were amazing. When we turned around in the middle, a bank of fog was rolling in and by the time we got back to the welcome center we could hardly see the bridge at all.

We planned to catch a Golden Gate Transit bus back to the 4th street train station as it should have been faster. It was a far more confusing bus system than the Muni and ended up taking longer as their busses didn’t arrive as scheduled. It also cost quite a bit more when it didn’t take us all the way to our train station and we caught a Muni bus to take our tired feet the last mile. But we did make it back to the station in time to catch an express train back to San Jose. This train made fewer stops so it took less than an hour to get to San Jose instead of 90 minutes. Next time we will just stick with the Muni busses when in San Francisco.

The most interesting thing we learned from this experience is that the Google Maps app on our phones has all the bus and train schedules on it. Just plug in where you want to go and choose public transportation as your mode of travel and it will give you all the options and usually calculate the cost as well. It is truly amazing the information we now carry in the palm of our hands! Of course, by the end of the day my battery was dead and I had made quite a dent in my data plan, but it really made traveling in an unfamiliar city less stressful.

We planned to make a second trip in to the city to visit Fisherman’s Wharf and Alcatraz. But after having experienced the city first hand, we were more convinced than ever that we didn’t want to drive our big truck in. And when we added the cost of public transportation to the price of the Alcatraz tickets, we agreed it just wasn’t worth it. We look forward seeing more of San Francisco on our next visit someday.

The next day we headed back to San Jose to see the Winchester Mystery House. The mansion tour was a bit pricey at $36 each but had long been on our must see list. Jim was looking forward to the gun museum, a collection of every Winchester gun ever made. It was interesting but paled in comparison to the free gun museum at Bass Pro Shops in our hometown of Springfield Missouri. 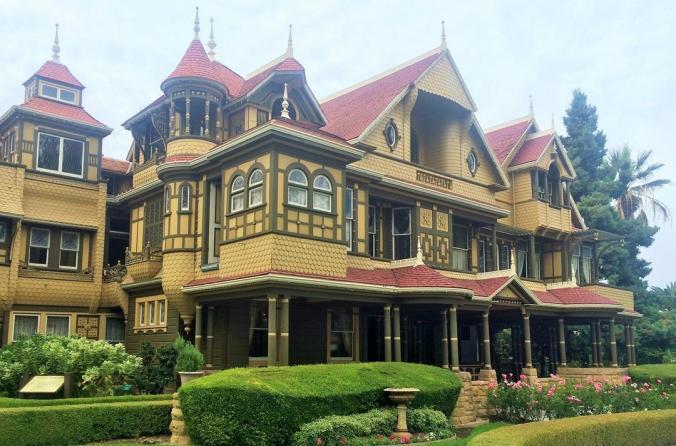 The house was very interesting to see, especially since we love architecture. The amount of detail in the woodwork was mind boggling. The stained glass windows and doors were stunningly beautiful. You are not supposed to take pictures inside the house but I couldn’t help sneaking a few with my phone. I loved this beautiful stained glass door.

There is so much to do in this area and we only scratched the surface. We enjoyed a day in Monterey where we had lunch at Fisherman’s Wharf and walked the Bay Coastal Trail. There are wineries galore both north and south of San Francisco and many have beautiful gardens to explore. 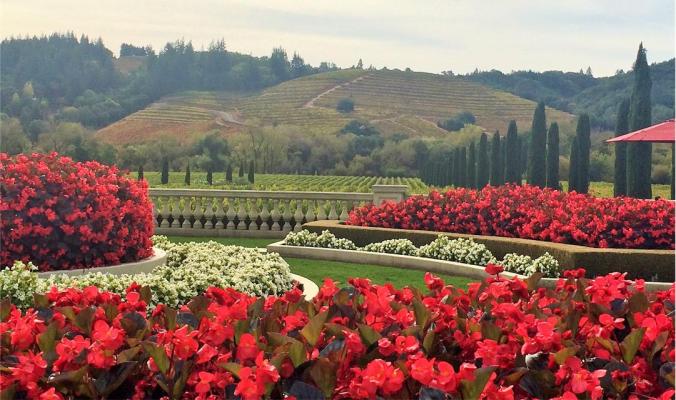 We enjoyed our stay in this area immensely and will be back.

One thought on “San Francisco”