Edisto Beach, SC – April, 2016 After our chilly weekend at Myrtle Beach a few weeks ago we were watching and waiting for some decent beach weather. Just as the weather was improving, we saw a 3 night opening at Edisto Beach State Park’s beach campground. When we stayed here last fall we had to stay in their Live Oak campground, a half mile up the highway from the beach. We really wanted to return but stay in one of the 75 beach side sites. Edisto Beach State Park is only 50 miles from our property so it was mucho convenient.

Our site, number 58, backed up to the marsh that fills up with water at high tide. The site was near the limit of what we are willing to pay for a campsite. It averaged $58 per night after all fees and had water and electric. But you cannot beat the convenience of walking past a couple rows of campers and over a dune and being on the beach. If one of you gets tired or bored they can just go back home without making the other one leave. If Jim wants to go fishing, there is nothing stopping him.

Last time we were on the east coast Jim saw a guy with a great beach cart that carried all his fishing gear and stuff. He has been looking for one with the right features and price ever since. He finally found exactly what he wanted for about a hundred dollars at Dick’s Sporting Goods near Brownsville, Texas. We have used it a couple times since, to carry our chairs and cooler to a nice riverside spot in Texas and to get our stuff to and from the camp’s laundry. But this was to be the cart’s true beach debut.

The big wheels were a must and worked great even in the loose sand. The cart folds down pretty well but those wheels still take up their fair share of the basement. 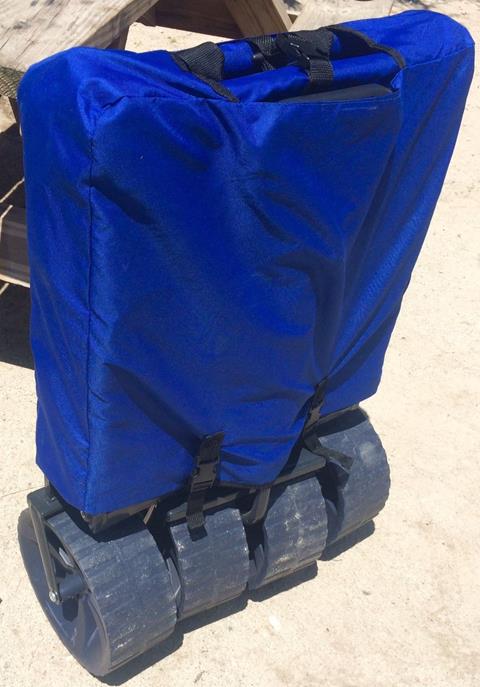 Totally worth it though when you can easily haul two chairs, fishing gear, and a cooler past the crowds on the beach and nab a secluded spot to spend the afternoon. 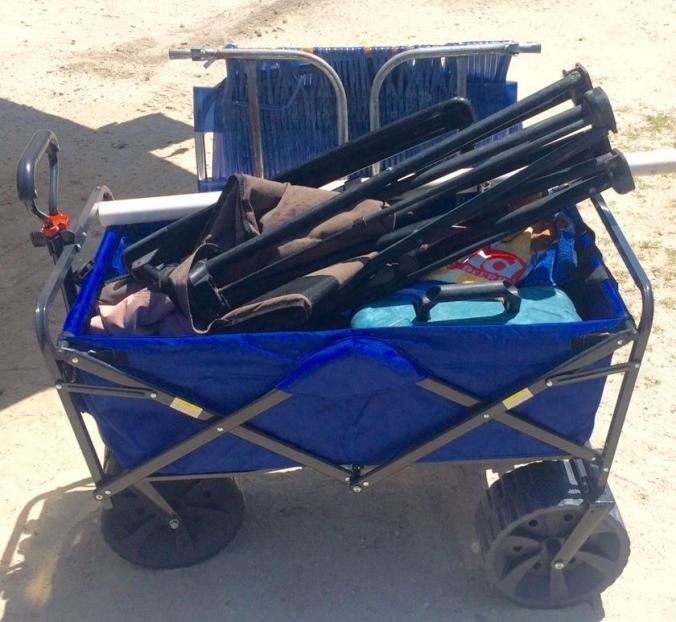 We spent our first full afternoon at the beach; sunning, fishing, generally being lazy. Here is a pic of one of the many beach accesses. We loved the dead tree and yellow flowers.

The next day we loaded up the kayaks and drove a couple miles to where the state park has a boat ramp on Big Bay Creek. From there you can paddle up the creek or out to the mouth of the South Edisto River and on into the ocean. The creek has more of a tide than a current. So our plan was to put in and float upstream with the tide, wait for the tide to turn, and float back with the tide.

It was a wide creek with grassy marsh on both sides. We floated up the creek and were passed by a group of dolphins.

There were at least four of them. We saw quite a bit of them for about a minute but they were fast so it was hard to get any picture at all especially since all I had was my iPhone.

After we floated past the state park’s property there were a dozen or so private docks crowded on one side of the creek, each with a long wooden sidewalk built between it and a big house back in the trees. Many of the docks had impressive boats. After them we had the creek to ourselves again.

We only went about a mile and a half and then tried to stay out of the current and wind that was pushing us upstream and wait for the tide to turn. There was such a strong wind coming up the creek that even when the tide turned and water started flowing toward the ocean the current wasn’t strong enough to counteract the wind. So we ended up having to paddle against it all the way back to the boat dock. We weren’t totally surprised by this outcome and were grateful we hadn’t gotten too far from the takeout. Next time we’d like to float toward the ocean just before low tide and hope the wind and the tide will carry us back to the dock with less effort.

Besides the dolphins we saw in the creek, we saw a lot more wildlife in general on this trip than we did during our last visit. We saw a huge turtle swimming in the ocean one day. The campground also has some very aggressive raccoons (the squirrels aren’t exactly shy either). This big fella had no problem walking into people’s camps in the middle of the day and rummaging through their things. 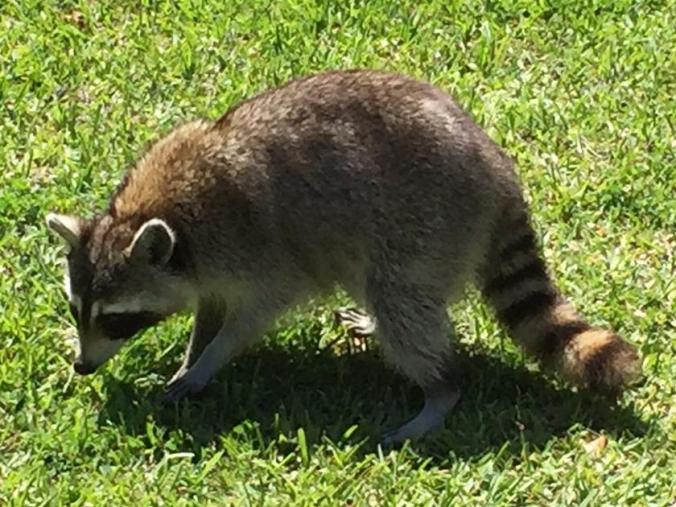 We were careful not to leave any trash out but Jim forgot to put his fishing gear away one day and they ate/stole/are wearing his plastic lure and they broke one of his poles, probably trying to get away after getting tangled up. Thankfully he was able to repair it.

When the tide went out the marsh behind our camp became a mud field. We were sitting there one afternoon and realized the whole thing was moving. There were a kazilion crabs about an inch wide, each waiving their little claw at us. How friendly!

The park’s learning center is located near the boat ramp. It’s definitely a must see if you visit. It’s much nicer than we expected. They have a beautiful building with a nice back porch full of rocking chairs.

They also have lots of live snakes, fish, and such in aquariums. Glad this fellow is no longer in that category.

The place has some beautiful murals and displays like this cool boat.

We had a wonderful three days in Edisto Beach and look forward to visiting again.