Eminence, MO – July, 2016 The Current River is so long and varied that it’s like having several rivers to choose from. Round Spring is just 12 miles north of Eminence and the river here is a very nice size. It is so much bigger than it is near Montauk where we floated a couple weeks ago and our kayaks often scraped the bottom. But the river is less than half as wide as it is near Van Buren where we went last week.

I made this reservation almost a month ago because this Monday thru Wednesday was the only 3 days I could get an electric site here before we left Missouri. Round Spring is a great campground even though the 6 sites they have with electric and water are in the center and lined up like a parking lot. The fee for these sites is $22 per night.

The spring for which the park was named is a short walk from camp. This picture really doesn’t do it justice. The spring flows into this sinkhole and you can only look down on it from the 15 or so foot bluff around it. Then it flows under a bluff on one side and down to join the river.

There are several great old bridges in the area. This bridge over Sinking Creek is no longer in use. It has some obvious signs of damage. You can see the new metal bridge behind it. 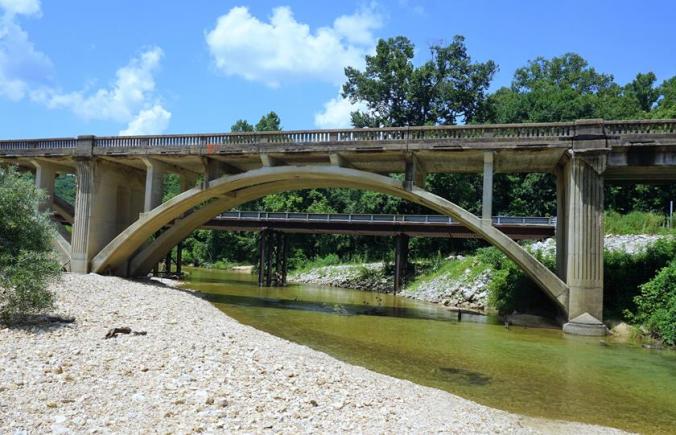 The 9 mile float from Pulltite into Round Spring campground is one of our favorites. Carr’s Canoe Rental will pick you and your kayak up at your campsite and port you to Pulltite for $15 per person, which is extremely reasonable. But we decided to be lazy this trip and not to float.

Instead we found an excellent spot to enjoy the river for a day. Just over that new bridge in the above picture and less than 2 miles from camp is a gravel road to the confluence of Sinking Creek and Current River. It is a free day use area and they have primitive campsites for $5 per night.

Our favorite part of the float from Pulltite to Round Spring is stopping at Sinking Creek anyway. After spending the day floating the frigid waters of the Current the creek water is like a warm bath. It is probably only 10 degrees warmer but it feels amazing.

We spent most of the day sitting in Sinking Creek. Floaters on the river often stopped to enjoy the gravel bar. A father and kids stopped and stacked these rocks. 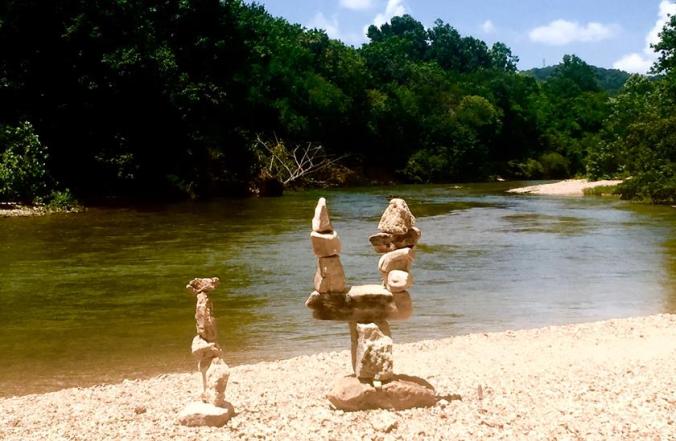 After a day of fun in the sun we were looking forward to visiting the Round Spring Cavern the next day. On our previous visits the cave was closed for most of the summer due to the White Nose Bat Syndrome. Apparently they determined that the cave was already infected so they reopened it.

They give 3 tours a day and the cost is only $5. What a bargain! It turned out to be a really awesome cave.

Each person carries an electric lantern and the ranger carries a flashlight. These are the only sources of light in the cavern. 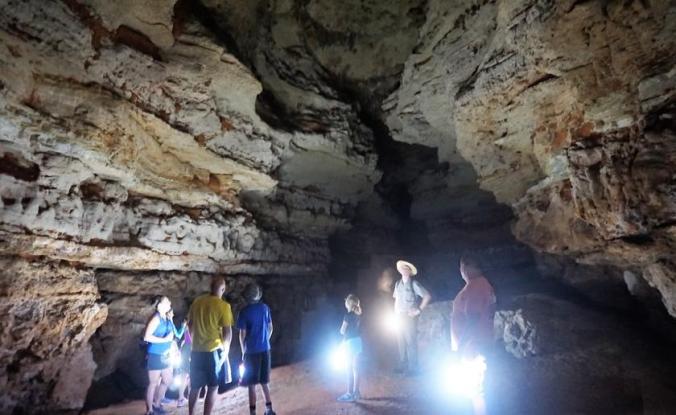 It was really fun and challenging to photograph the cave. Of course to compensate for the low light the camera’s shutter stays open longer. The cave formations were good at holding a pose but the people in my shots were not so cooperative. 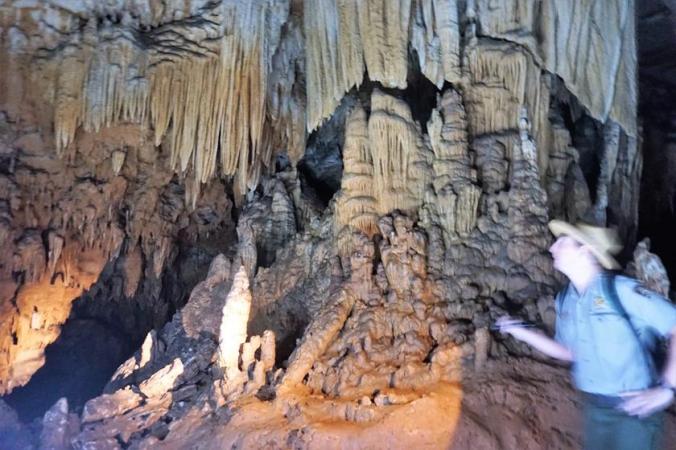 Since the bats were wiped out the main cave inhabitant is now the salamander. We saw a half dozen of them throughout the tour. 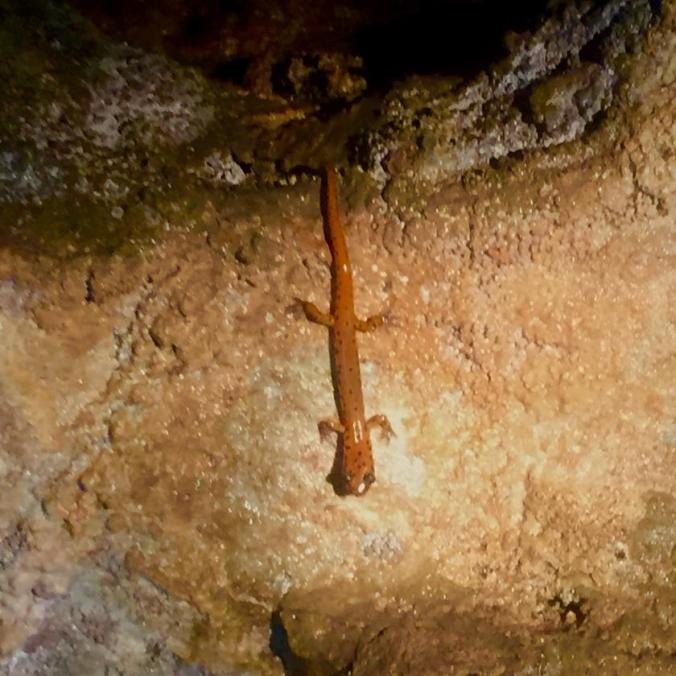 In the very distant past the cave had a much larger inhabitant. There is evidence that giant short faced bears used this cave over 10,000 years ago. There are bear beds, where they have wallowed out an indentation in the clay. And claw marks, this one was authenticated by scientists.

We have been in quite a few caves and we were very impressed with this one, especially for the price.

Jim and I have enjoyed the last two months bumming around our home state, enjoying the clear, cold rivers, and spending time with our family and friends. But we are excited to move on to places we’ve never seen, spend time exploring on our own, and get back into our routines. My next post will be from some place new to us and much cooler.

One thought on “Round Spring Camp and Cavern”