August, 2016 – Niagara Falls, New York & Ontario I have wanted to visit Niagara Falls for many, many years. I can’t claim I’ve never been as there is evidence to the contrary. 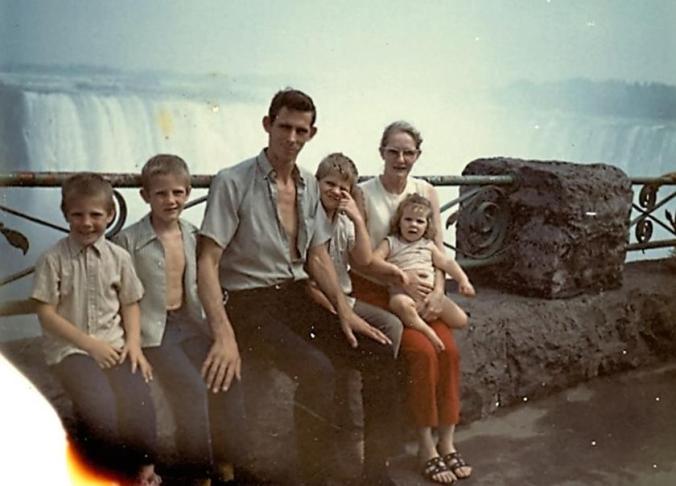 We spent the first full day there seeing everything we could from the American side. Our first view of the falls from Prospect Point took my breath away. The enormity of it is just hard to wrap your head around. 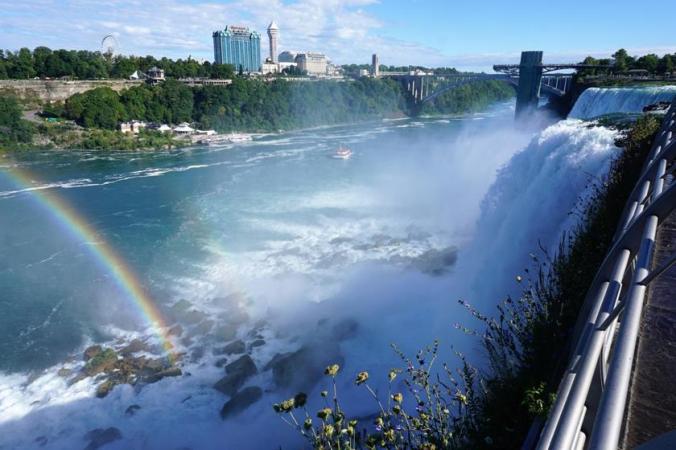 …and Horseshoe Falls. There is a perpetual rainbow, often two, over the falls, because of the large amount of mist.

Everything I read said we would be paying $10 per day to park but we were pleasantly surprised to find free parking at the Niagara Gorge Discovery Center. We bought trolley tickets there for $3 each. We hoofed it most of the day but it was nice to be able to hop the trolley back to the truck at the end of the day. The trolley driver said that on slow days they also don’t charge for parking in lot #3.

Our first day at Niagara had really wet our appetite and we could not wait for the next day so we could visit the Canadian side. We had every intention of driving over until the very last minute when Jim suggested we walk. We went back to the free parking we had found the day before, grabbed our backpack, and set off.

It was just two miles from the parking lot, across the international Rainbow Bridge, and all the way to head of the falls. Getting through Canadian customs at 8:30 in the morning was a breeze. There were only a couple people in front of us.  The official  asked us just a few questions and didn’t search us.

Here is the view as soon as you get past customs. The Canadian side was very beautifully landscaped all along the edge of the gorge.

We bought WeGo shuttle passes at the first welcome center we came to so we knew whenever we got tired we could get a lift. The shuttle passes were $7.50 each Canadian so after the favorable exchange rate and with the finance charge my credit card charged for the conversion we paid $6 American.

We weren’t in any hurry to leave the walkway along the gorge for a while. The view of the falls from the Canadian side is so much more complete than the American side. The view across from a waterfall is always better than from the top of it which is basically what you get from the US.

Here some brave souls zip line in front of the American Falls. 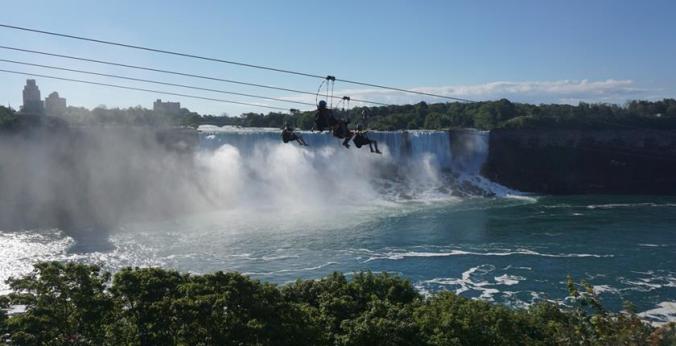 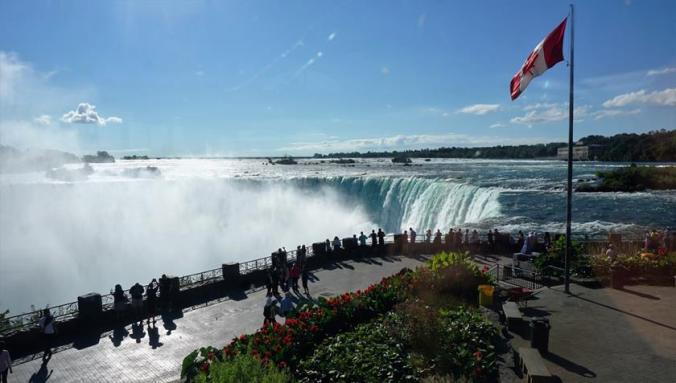 We walked another half mile past the falls up the river admiring the landscaping, river views, and cool buildings. Then we decided we needed a rest so we hopped on a shuttle and rode it the 8 miles that it traveled down river. We rode past neighborhoods, and through downtown, and past every conceivable tourist attraction.

We were actually surprised how crowded the bus was at that time of the day. There were times when it was standing room only and at another point we were the only people on it. The bus turned around at Queenston Heights Park and we continued to ride it back through all the same stops and finally got off when we got back to the first stop after Rainbow Bridge.

We had our lunch in a lovely shaded garden and now that we were rested and nourished we set off to see more sites on foot. A couple people had suggested we visit Clifton Hill, a popular street near the falls. One person even compared it to the Vegas Strip.

So off we went up Clifton Hill. I was surprised to find the main section of this strip was only about a quarter mile long. And we found it to be more comparable to Branson than to Vegas. 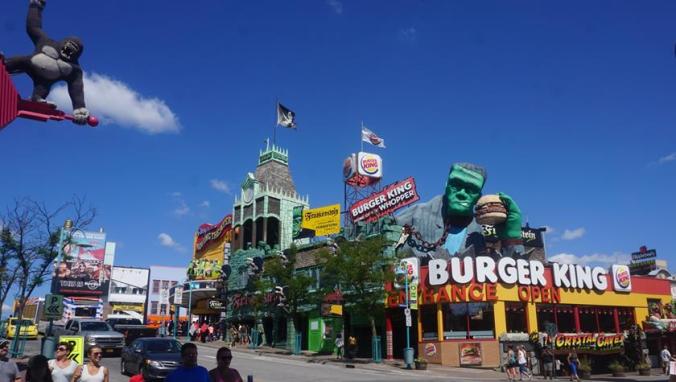 But it was entertaining to see and at least the walk back to the falls was downhill. We had seen everything we came to see but I requested a return walk along the falls as the afternoon lighting would make for better pictures.

So we made our way along the now incredibly crowded walkway and admired more of the Canadians’ gardening. 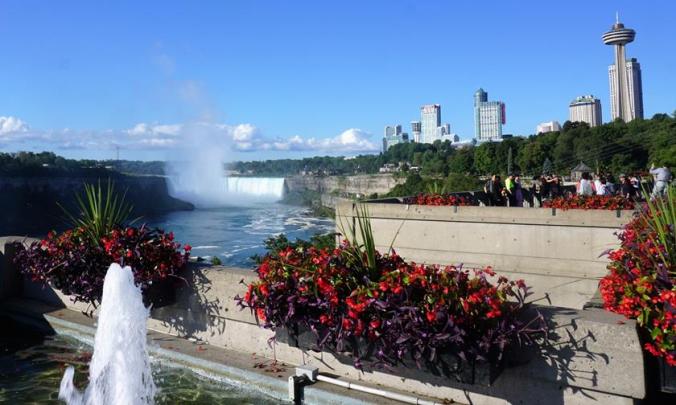 We gazed a final time at the entirety of the American Falls.

And we got more pictures from the bridge, the best place to get a good shot of both falls together.

We were surprised by the 50 cent toll the Canadians charge to get back on the bridge but grateful they provide both a Canadian and American change machine and we actually had a dollar on us. The pedestrian and car lines waiting to get in to Canada in the early afternoon were extremely long. The line of cars waiting on the bridge to get into the US was shorter but we walked back through customs with hardly any wait, answered a few questions, and were back at our truck in no time grateful we had chosen to walk.

Our campground was an easy 15 minute drive from the falls on nearby Grand Island. The bridges to the island charge a toll to get onto the island but not to get off. So we paid something like $3 to get the fifth wheel onto the island and then paid $1 every time we left and wanted to return home.

We camped at Cinderella Motel and Campground where we got an electric site. The sites were close but they were extremely dark and quiet tucked way back behind the hotel. Those are traits we treasure as so many campgrounds have a lot of traffic noise and security lighting.

The Passport America rate was $30 for the first two nights then they charged us their regular rate of $40 for the second two nights. That was almost half what most campgrounds in the area charged. The very best deal in the area is free boondocking at the casino right by the falls. But it was just too hot during our visit to consider going without AC.

One thought on “Niagara Falls”