Big Hickory Island, FL – November, 2016 Just 10 miles from our RV resort is a put-in that offers just about everything a kayaker could hope for. We were introduced to Big Hickory when we joined our campground’s kayak club for their first outing of the year. There were two other couples in inflatable tandem kayaks.

It took a few minutes for them to inflate their kayaks on the beach so I threw my boat in the water and met the locals.

Both couples had been here before so once they got in the water we just followed their lead. We paddled along the edge of the mangroves and then over to a beach only accessible from the water.

Just before we landed between the boats we noticed a lot of dolphin activity in the bay so we paddled back out. These dolphins were more active than any I’ve encountered before. I assume there was more than playing going on but I’m not one to speculate on the romantic interactions of others. This pair came up almost under Jim and he got a great shot with his GoPro which tends to give it that fish eye perspective.

The tide was going out so we landed on the bay side of the beach and walked around the point to the beach. I forgot to take my camera on this walk but the beach looked pretty much looked like every other area beach except it was practically deserted. Our new friends said that it will be much more crowded in season (January-March).

There is a large picnic pavilion and a roped off swimming area courtesy of a local community called Pelican Landing. They ferry their residents over for the day as one of the amenities they offer. About half the beach showed signs of improvement and appeared to belong to them although we walked the length of it without being bothered.

After our walk we returned to our boats on the bay side and ate our lunches while watching the dolphins play. Quite a strong wind was now blowing across the bay and out to sea. So we headed back to the take-out. It wasn’t too hard a paddle and we were impressed with how well our friends’ inflatables handled it.

Jim and I returned for a second visit by ourselves a few weeks later to further explore the area. This time Jim brought his fishing gear and we headed under the bridge to explore Estero Bay.

Just on the other side of the bridge we saw dolphins swimming. Jim fished while I tried to get a good shot of them. They never did get very close so this is the best I came up with. If you zoom in there’s one right in the middle.

We then turned right into the mangroves. I puttered along the edges looking for wildlife. None here but I love the trees. 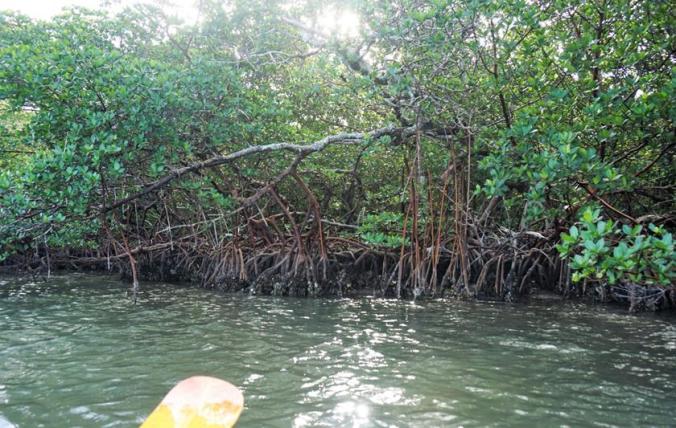 I finally found this beauty. 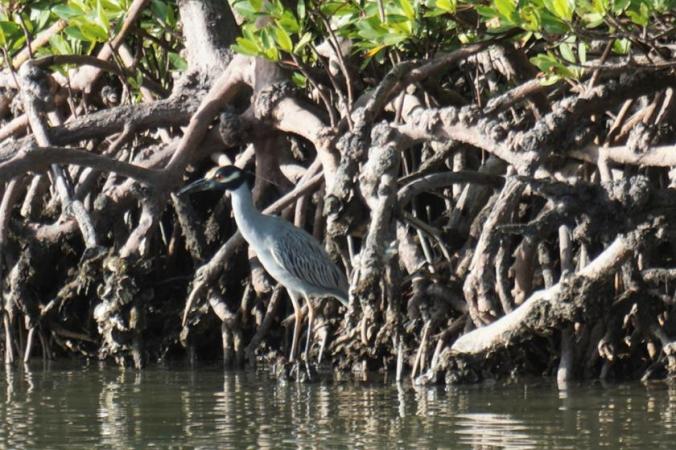 Then we were almost overrun by a flock of pelicans. They are fun to watch.

I love how big a splash they make every time they land.

Big Hickory Island is between Bonita Beach and Lover’s Key State Park. There is a put-in just across the bridge from Dog Beach west of the road. There is plenty of free parking and a short walk to the water. The blue arrow on this map represents the put in. The orange line represents our path on our first outing there and the red was the course we took on our second trip.

We hope to go again soon and plan to spend a full day on that lovely beach.

One thought on “Big Hickory”