Tampa, FL – February, 2017 Our daughter planned to visit the Tampa area for the day.  I asked to join her and Jim chose to stay home. So we enjoyed a fun girl’s outing. This was her trip so she set the itinerary and I just went along for the ride.

It’s a two hour drive to Tampa from Bonita Springs. We rocked out the whole way there, taking turns controlling the playlist. We arrived at our first stop about 11.

Tampa Electric’s Manatee Viewing Center is near Apollo Beach on the Tampa Bay. The salt water used to cool their equipment is discharged into a canal and the manatees congregate there, especially on colder days. They have built a very nice nature center devoted to these gentle giants and it is totally free.

Of course, the primary draw is the manatee viewing decks across the canal from the power plant.

We were there on a fairly warm day so there weren’t a huge number of manatees in the water. We spotted at least 6 but they were a good ways away so they were just large, gray bodies just under the surface of the water. A couple of times people asked, “do you see anything?” and we pointed them out.

We were not surprised that this was the best manatee siting we had. There were several sculptures and murals.

The highlight of our visit here was their ray exhibit. They had a shallow pool with about 20 rays swimming around. There were several different variety of rays.

You could put your hand in the water and they would swim under it and let you “pet” them. They had glass windows in the side which made for great pictures except for the reflections. You can see the playground behind me in the above photo.

Since this was a girl’s day it had to include some shopping so we stopped by the Westfield Brandon Mall. It was an extremely nice indoor mall with just about every store you could desire. We enjoyed a nice walk and lunch in the food court.

Next on the agenda was a stop at Ybor City just northeast of downtown Tampa. Ybor is a historic Latin neighborhood and a National Historic Landmark District which began in 1886 when a large cigar factory relocated from Key West. We found a parking lot and walked the main drag, East 7th Avenue.

The area is primarily an entertainment district now, so it probably really comes alive after dark. But it was still a great stop with interesting architecture, some funky little stores, and a fun atmosphere. It reminded me of Beale Street in Memphis or The Loop in St. Louis. Cigars are still a big part of the culture here. There were a couple bars with quite a few people sitting outside smoking cigars.

By this time it was 4 o’clock so it was time to make our way to our primary destination for the day, the Dali Museum in nearby St. Petersburg. Every Thursday evening at 5 they offer $10 admission to this famous art museum and my budget conscious daughter was determined that was the only time to see it.

The building itself was amazing with strange bubbles of glass protruding from the concrete structure. We explored the outside until 5. This beautiful tree appears to be adorned with ribbon but they are actually peoples’ admission bracelets tied to it.

Once inside a grand circular staircase led you to the galleries upstairs then continued its spiral to the ceiling.

We first visited the Frida Kahlo exhibit which is on display until mid-April. It was a large exhibit with over 60 pieces including her paintings and personal photos. Her art is definitely odd and sometimes disturbing and based on the descriptions of her in the gallery, so was she. The gallery was extremely crowded so we moved on to the permanent exhibit of Salvador Dali’s work and life. 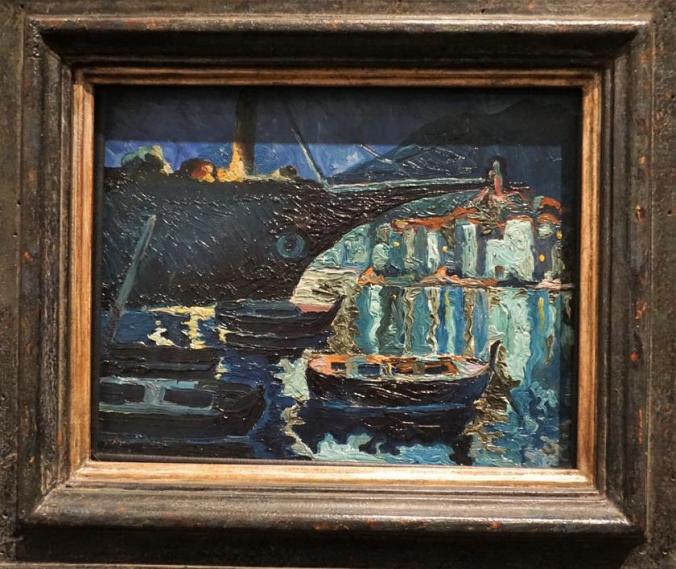 Considered a surrealist, his works were strange but I found them beautiful as well.

The best part of the visit was when my daughter dragged me into a little room I never would have noticed. They had a virtual reality exhibit which allowed you to go inside Dali’s work. Luckily there were only a couple people in front of us in line and two people could go at a time.

In less than 10 minutes we were seated side by side in chairs that swiveled 180 degrees and had the headsets strapped to our noggins. We had 3 minutes to virtually wander through a desert landscape with two towers and a herd of extremely long-legged elephants.

We experienced the same landscape but chose different paths through it. I was thrust to the edge of a crumbling balcony at the top of a tower. It was startling and I couldn’t get back to the relative safety of the stairs fast enough. Both of us enjoyed watching the herd of elephants walking practically right over us.

We saw everything we wanted in the museum within an hour. It was a great experience made better by the reduced admission. I don’t think I would have enjoyed it nearly as much if I’d paid $25 to see it.

We rounded up our girl’s day with breakfast at Waffle House as soon as we got outside of the city. Then we made the long trip home.

One thought on “Girl’s Day in the City”