January-May, 2017 – Naples, FL As I mentioned in my post about babysitting this winter, Jim was not twiddling his thumbs while I brought home the bacon. He did consider a part-time job and even inquired about a few but he never really got serious about it. He was sure he could find a way to make more than $15 per hour and not punch a clock.

He toyed with several ideas of how to make some money without working for someone else. He thought about fixing up an old camper and reselling it but just never found the right opportunity. He considered doing handyman work but pursuing a contractor’s license in Florida was too much of a hassle. He tossed around several ideas but hadn’t landed on one when fate intervened.

We had picked up some used bikes at a garage sale and were enjoying riding them around the Bonita Springs neighborhoods each morning. We rode into one cul-de-sac and stumbled onto a house for sale. It looked distressed, just our kinda place!

So I called the realtor and found out it was a foreclosure and was being auctioned on one of those online auction sites, zome.com. We took a look at it and really liked it, almost too much. We were sorta fantasizing about a pool and furnishings. The best feature of the house was there was just enough room to park our RV beside it.

Long story short, we lost the house to another bidder. We moped for a day or two. Then we admitted it was probably for the best.

Were we really ready to be that tied down? NO! We agreed we were not. But we did decide that buying a rental in the area, maybe even one we could eventually see ourselves living in, was not a horrible idea.

So when the realtor that had helped us with that first auction said that he had another property we should check out, we agreed. The second house he showed us was in nearby Naples in a working class neighborhood the opposite side of the interstate from the ocean. We liked it and agreed it would make a good investment.

We weren’t very optimistic about the auction process but we told the realtor how high we were willing to go and let him handle it. And he got it for us, for $7500 less than we were willing to pay. And that’s how we ended up owning real estate in Florida. Isn’t it beautiful?!

We decided to fix it up and try to resell it. 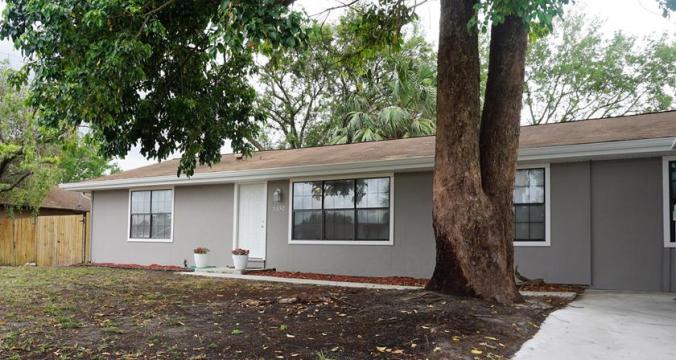 And if it hadn’t sold it would have made a great rental with good cash flow. Rentals are in high demand here.

We closed in only two weeks on December 28th. We immediately went to work. We were excited to polish this diamond in the rough and see it shine.

What? You only see coal? How bout now? 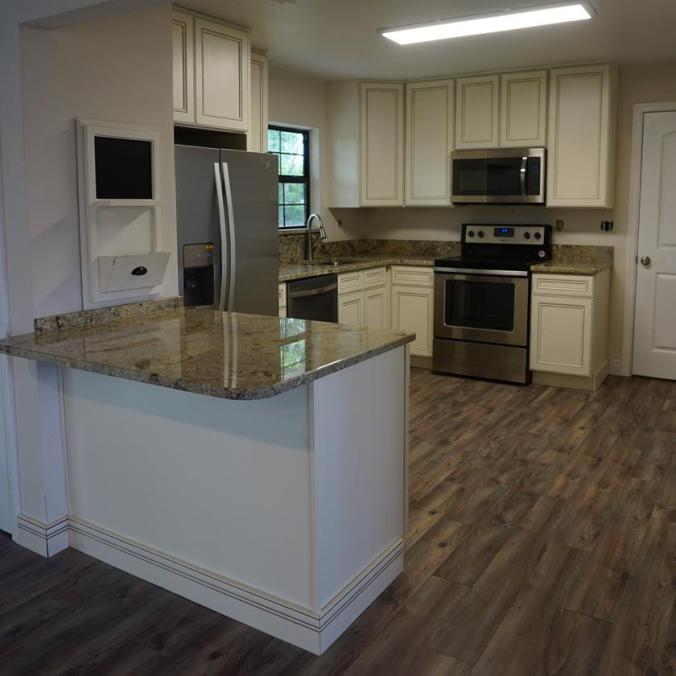 We hoped to have it mostly finished in 3 months, giving us April to sit back and enjoy our re-retirement Florida lifestyle. Of course that didn’t happen. We both worked on it pretty much full-time for the rest of our stay. Even when I babysat in the morning, I would usually go work on the house after that.

We were pretty pleased with the results. And we got really good feedback from everyone that saw it. We put laminate floors throughout.

The house didn’t have a garage but made up for it with a mother-in-law’s quarters, making it a 4 bedroom, 3 bath home, unheard of in this neighborhood and price range.

We skimped everywhere we could, painting the original bath vanities, salvaging as many of the bath fixtures as possible. We had a best case scenario budget and a max budget. We ended up scraping by just under our max budget and still didn’t do everything we wanted to the home.

We hoped to install a lanai but thankfully the eventual buyers were perfectly happy with the back yard as it was.

The sacrifice was big. We wanted to spend more time with our daughter. We hoped to explore much of the state. We certainly never imagined we’d spend the whole winter in Florida and not do any scuba diving.

Thankfully the payoff was pretty great and made up for most of it. We have worked way harder for way less before.  This was our most profitable short term flip ever. We’ve made more on homes we’ve held for a couple years but of the ones we bought to fix up and immediately resell, this is by far the winner.

We have no regrets but aren’t in any hurry to do it again right away.  We are tired and ready to be re-tired again!

6 thoughts on “Flippin’ in Florida”