Kanab, UT – July, 2017 We headed next to Kanab, Utah, just over the Arizona border. It was meant to be a stop on the way to the next place we wanted to be. But we ended up enjoying the layover very much.

We had driven straight through Kanab without stopping our first year out. We were on our way from visiting Zion to seeing Lake Powell. I recently read a post by one of my favorite bloggers, Ingrid at Live Laugh RV, about tent camping in a state park near Kanab called Coral Pink Sand Dunes State Park. I thought “we were right there, how’d we miss that?”

So bright and early our first morning in the area we drove over to check it out. The park seems specifically designed to appeal to those with ATV’s (all terrain vehicles) or as they are often referred to in these parts OHV’s (off highway vehicles). The campground loop was pretty tight and I wouldn’t want to try to get my 5th wheel through it.

The sand really was a very nice shade of coral.

We were most intrigued with trying to guess which animals the many footprints in the sand belonged to.

There was basically just the one viewing platform in the park. From there you could hike off across the sand if you wanted. We didn’t relish starting our day with sand in our shoes so we passed and left the park.

The views from the road just outside the park’s gates were so enticing that we stopped at the first pullout. From there you had no option but to climb a pink mountain if you wanted a better look. We decided to go for it and shake out our shoes later.

When we tackled the mountain we found that the sand had a wonderful powdered sugar quality to it. It was amazingly soft and for some reason not prone to getting in your shoes. You didn’t sink into it as much as expected and it didn’t fly around as much as normal sand. 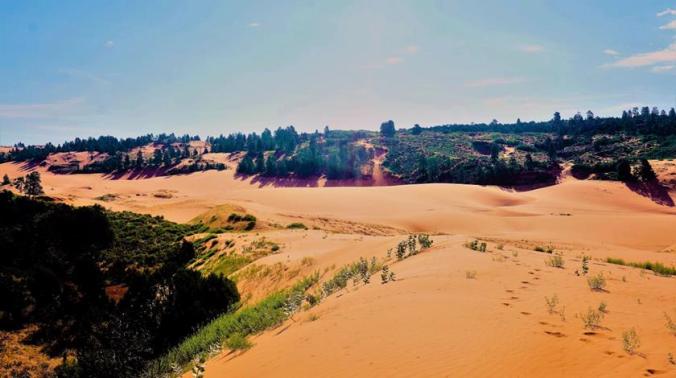 At the second pullout after we left the park was a very large parking area. It appeared boondocking (free camping, dispersed camping, etc.) was allowed. It was too hot to consider this option in July but if we returned during the spring or fall we would absolutely consider camping there and exploring the fluffy, pink mounds some more.

You could easily stop at either of these pullouts to explore the sands and avoid the $8 per day state park fee. But we don’t begrudge the state a reasonable fee for protecting such an awesome area. We enjoyed meeting the work camper that collected that fee and talked to her about her and her husband’s life as hosts and full-time RVers.

Since arriving in Kanab, we had seen several of the same type of snake dead on the road. While in the state park we finally saw one alive, thankfully from the safety of our truck. He was crossing a parking lot.

He was quite lively so we didn’t really get close enough to tell if he was poisonous. We didn’t think he was. Even so it reminded us to stay on trails where we could see that there was a clear path in front of us.

Kanab was a very nice town with an outstanding visitor center, two small but excellent grocery stores, and a pleasant vibe. We inquired about hiking trails and were directed to a hike around the hill that dominated the skyline to the east of the town. The hill proudly displayed the town’s initial K on it. We stayed on the path but this entire family chose to scramble up the hill and onto said K. 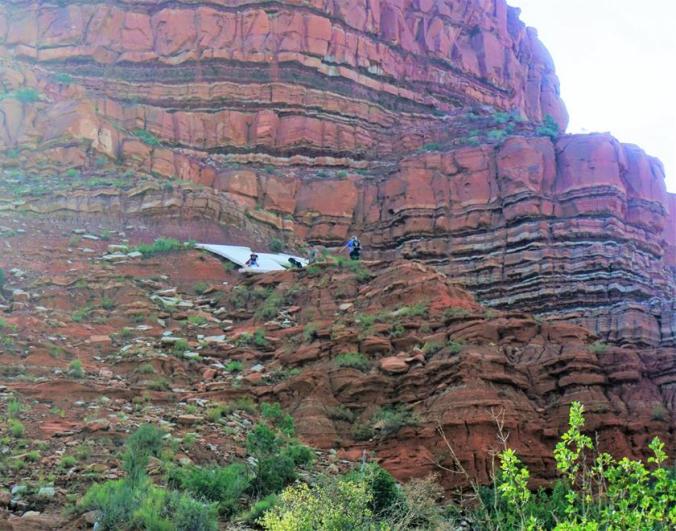 The hill provided welcome shade at the beginning and the end of the hike. 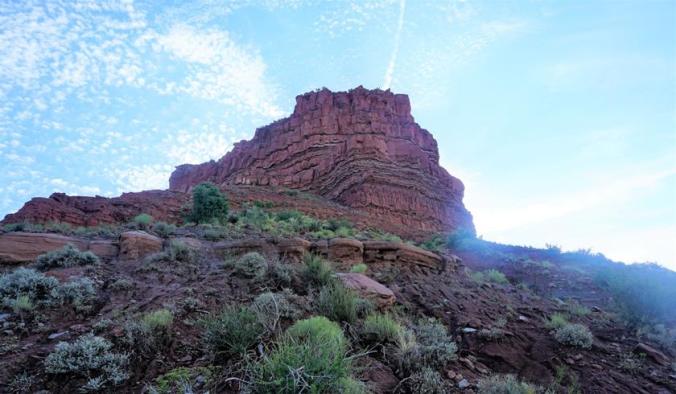 And the path afforded excellent views of the town and the surrounding red cliffs. 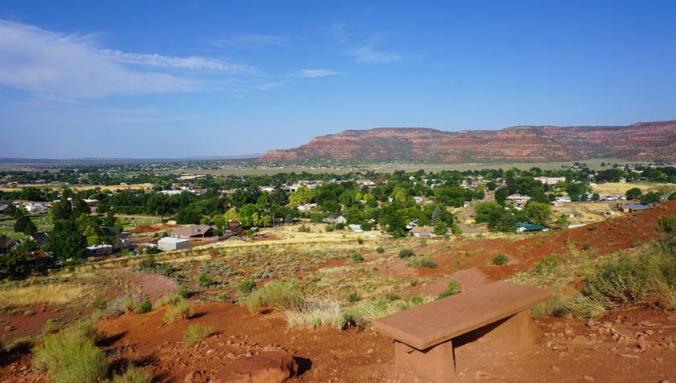 Highway 89 through Kanab was the main thoroughfare we drove each day while exploring the area. It is a scenic highway and the views all along it are incredible. There is no reason to explore beyond the highway when it affords you views like these.

And this cool pond we passed every day. Apparently there used to be a campground here but it was bankrupt by a snail. According to our RoadsideAmerica app there was an endangered snail in this pond and the powers that be gave them so much trouble they had to shut the campground down.

I kept seeing the same striking blue bird in the area but never could catch a pic of it. I finally saw one that stayed still long enough for a photo op. 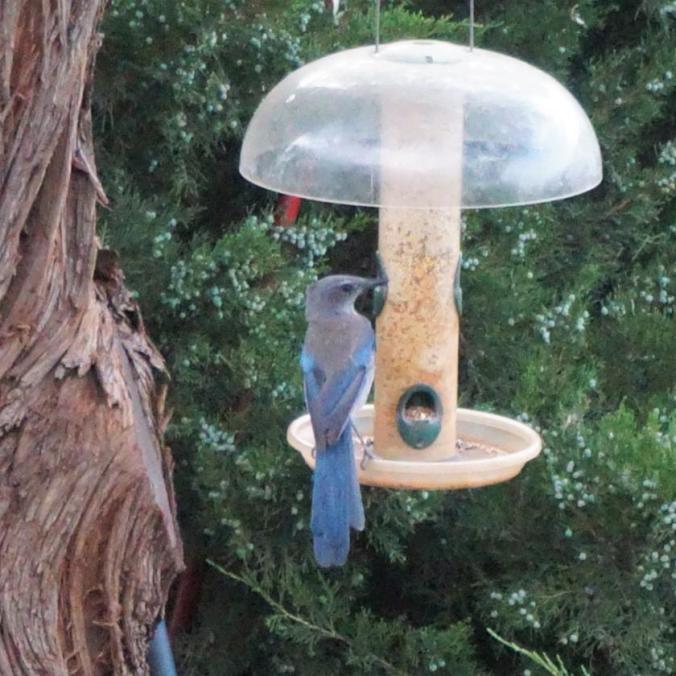 Jim was taken by this beautiful bloom. It had such detail for a small flower. It wasn’t much bigger than an inch in size.

I chose a campground 10 miles north of Kanab as the attractions in the area I was interested in were all just north of the town. The campground was called East Zion Riverside RV Park but it was part of the Thunderbird Lodge in Mt. Carmel. The rates were reasonable at $40 for full hookups but the perks were priceless.

They had a nice pool and a hot tub that were available 24 hours a day. We only made it to the pool one afternoon. But we were in the hot tub by 7 every morning of our stay and had it all to ourselves while the rest of the guests slept.

There is one day of our stay in Kanab that deserves it’s very own blog. I’ll get that post up within a few days!