Jensen, UT – July, 2017 We got an early start to get down off our mountain near Flaming Gorge. It was only 70 some miles to our next campsite but it was 4000 feet down. There were about 10 miles of 5-8% downgrade and switchbacks. Jim had not enjoyed the drive up and was not looking forward to the drive down so he wanted to get it over with, hopefully while traffic was light.

One of the dangers of traveling at this time of day though is that wildlife is very active. In that area there were tons of cattle grazing alongside the roadway. Jim is pretty cautious, going below the speed limit and scanning the sides of the road for movement.

That is the only reason he managed to avoid hitting the deer that sprang in front of us. Thankfully we were on a long straight stretch and he saw her on the side of the road some distance away and started braking. Neither of us was sure we weren’t going to clip her though.

We were holding our breath when the tiny foal we hadn’t even seen made the rather late decision to follow her. Jim was already trying to come to a stop so there was nothing more that he could do. We didn’t think it possible that the babe would make it and weren’t sure it had until it emerged unscathed within inches of our bumper. Whew!

After four days on a mountaintop, coming down to 5500 foot elevation felt like descending into hell. The highs were only in the mid-90’s with little humidity so it couldn’t have been that bad. We were just spoiled to cooler temps and it took some getting used to.

We arrived at Outlaw RV in Jensen before 10am. We had a full hookup site for $36 per night but there was no shade so our AC was going to be working double time the next couple days. Once we got set up our next order of business was getting some groceries. There were no stores in Jensen so we drove 8 miles to Vernal.

Vernal is a very nice town. We had stayed there one night at the Fossil Valley RV Park ($39 full hookups) on our way to Flaming Gorge. A lot of people stay in Vernal when they visit Dinosaur National Monument.

The town is very dinosaur themed.

It is also picturesque. Main Street is decorated with more flowers than I have ever seen in one town. There are hundreds of arrangements like this one lining the street.

We happened through Vernal the first time on a Utah state holiday, Pioneer Day. We were treated to an awesome parade.

Apparently it is otherwise known as bring your tractor to town day. Now here is something I’ve never seen before.

After stocking up in Vernal we returned home for lunch and later made the short drive to check out the visitor center at Dinosaur National Monument. We picked up some information, saw all the displays, watched their movie, and were back home in about an hour. It was really crowded mid-afternoon and did I mention it was hellishly HOT.

We returned the next morning just after the park opened at 8 am. For the first hour or so you are allowed to drive directly to Quarry Exhibit Hall. After that you are required to take the shuttle bus from the visitor center.

It is a very short drive and we were the first visitors in the building. In fact, we did not have to share this incredible place with more than a half dozen people the entire hour we spent there.

The hall was built over the original dig site and now protects the remaining bones. There are thousands of real, really old bones sticking out of the earth. There’s even some you can touch.

There are some great interactive displays telling you about the original owners of these bones you see in front of you, what type of dinosaurs they belong to, and where the bone fits into their skeleton. I’m sure later in the day it would have been impossible to get your hand on these displays. We were able to play with them for as long as we wanted. 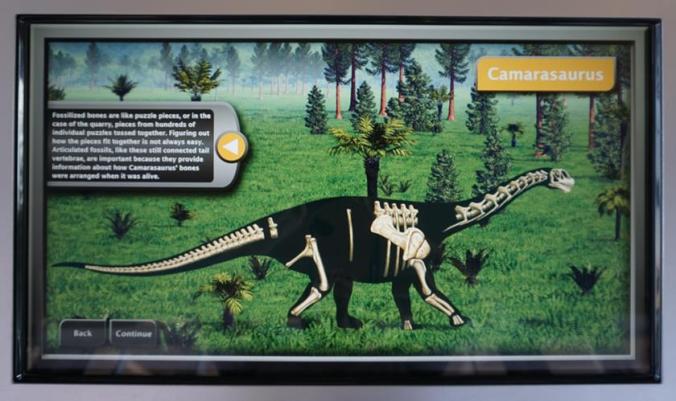 There is also plenty of information about the people who discovered this site, the process of excavating it, and where the bones dug from here ended up. It was all very interesting and I’m so grateful we had an unhurried and uncrowded opportunity to explore all this place had to offer.

After thoroughly exploring the hall we left to explore the remainder of the park available from this location. The mountains here often look otherworldly, like a dinosaur peeking out from behind them would not seem out of place.

There is a river through the park, the Green River, which flows here after leaving Flaming Gorge.

We drove to the end of Cub Creek Road to an old homestead. Jossie Morris lived here, mostly by herself, for over 40 years. She used two nearby canyons to coral her livestock. We enjoyed a hike into Box Canyon. 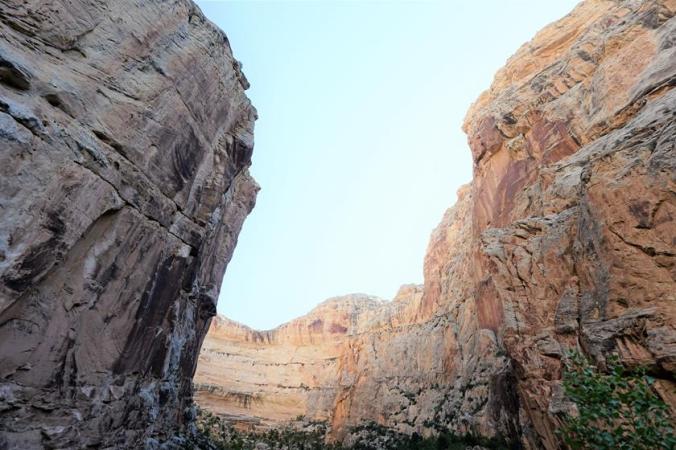 The colors of the rocks were unbelievable.

The final thing we were interested in here were the ancient petroglyphs. We made a few stops along the road on the way back. Sometimes the petroglyphs were a few steps from the road and sometimes we hiked up the hill to see them.

Some were obvious but others were easy to miss. There were hundreds of them, apparently etched into the rock by the Fremont people around 1000 years ago.

We left by noon before it got too warm. We really felt like we had seen all we had come to see. We had been willing to stay another day to explore more but it just wasn’t necessary. We were satisfied with our brief visit.

Dinosaur National Monument is actually millions of acres and is accessible via several roads hours apart. It would take a week and a lot of miles to really cover this park. But we were primarily interested in the dinosaurs and the petroglyphs and they are both found in this little corner of it so that is why we concentrated our visit on this part of the park near Jensen.

We LOVED our 3 week stay in Utah and definitely plan to return again and again. It offers so many varied environments. But we were ready to move on to Colorado.