RMNP, Colorado – August, 2017 We were certainly enjoying our time on the western edge of the Rocky Mountain National Park. We took several walks in the area but a couple of hikes were our most memorable.

One weekday we hiked to Grand Ditch via Red Mountain. We parked at the Colorado River Trail Parking Area. The parking lot had been packed every time we passed it so I expected a popular trail with lots of company. Instead we arrived at 8 in the morning and were about the 3rd car there.

We hit the trail and didn’t see another soul for an hour or so. Then a couple caught up to us and trailed us most of the trek. On our way back down the trail we met a few more hikers headed up the trail and a couple guys that had been backpacking several days and were on their way back to civilization.

The day was very overcast and I was grateful we never got rained on. Most of the trail was a pretty steady climb. Parts of it were rough and rocky.

I had developed a fascination with the local mushrooms ever since I discovered these red ones were not exclusively associated with small men with beards.

This romp through the woods gave me plenty of opportunities to photograph them.

Jim started enjoying the hunt and pointed many of the toadstools out.

These little orange ones covered an entire hillside.

I seriously took a hundred photos of fungi.

Our walk was occasionally interrupted by a beautiful mountain pond.

We finally made it out of the woods and enjoyed a view of the surrounding mountains. 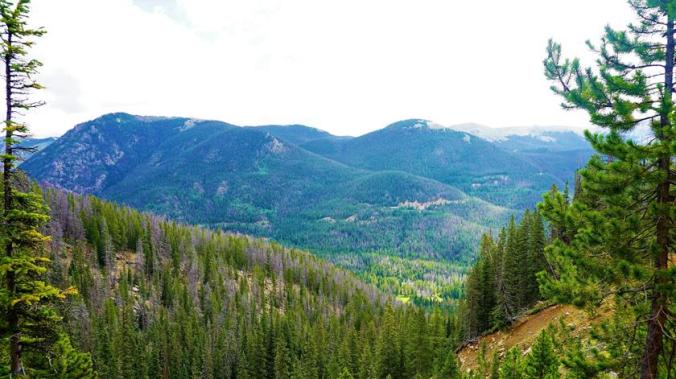 A short distance from there we came to the Grand Ditch. Apparently this is a water diversion project to bring snowmelt from the Never Summer Mountains to the eastern plains farmers. The result is plenty of waterfalls.

Jim is often a reluctant model in my shots.

I believe the exact words before this shot were “Where are you? Please get back in the frame.” I am grateful, he is so patient!

The hike to Grand Ditch via this route was 6 miles roundtrip. I must admit the hardest part was the trip down. Our feet and knees were screaming on the descent.

I wanted to do another hike of similar length before we left but Jim wasn’t feeling it. I weighed my options for a solo hike. I read the park’s literature on hiking in bear country and I appreciated their advice.

The 3 primary rules were; don’t hike alone, make lots of noise, and hike in the middle of the day. I’d prefer to have a hiking buddy but given the option between hiking alone or not at all, I’d rather take a hike. Make lots of noise I can manage. I have a bear bell, I’m not above singing to myself, and when I get tired of my own voice I will happily play music on my phone.

The rule I most disliked was hike in the middle of the day. I am a morning person. I’d much rather put in several miles before lunch. If I have to wait till later it’s likely to not happen at all.

So I considered their advice and chose a hike where, despite hiking alone, I was unlikely to be alone. I decided to hike the Green Mountain Trail to Big Meadows and return via the Onahu Creek Trail. We had never passed the parking lot for these trails without them being almost completely full.

According to the trail map it was supposed to be just over a 7 mile roundtrip but my GPS recorded it closer to 6 miles.

I arrived at the trailhead around 8 am on a Sunday morning and snagged the very last parking space. A couple were just hitting the trail in front of me and I lolly-gagged a little to give them a head start so as to not crowd them. I never saw them again.

The trail climbed steadily and I stopped often to catch my breath. Despite the very chilly morning, it didn’t take long for me to shed my down jacket, and shortly thereafter, my long sleeved shirt. The trail map looked pretty straightforward but the trail turned out to be a little more complicated.

There were several paths leading in various directions that were not on the map. And some of the distances were not entirely accurate. But in general it wasn’t terribly difficult to follow the directions and I was able to get to where I intended.

I didn’t meet another soul until I reached Big Meadows. Supposedly it is not uncommon to see moose here in the early mornings. But I was not hopeful on such a popular trail and shortly before arriving there I could hear people making quite the commotion from a nearby campground. It was still a pretty clearing. 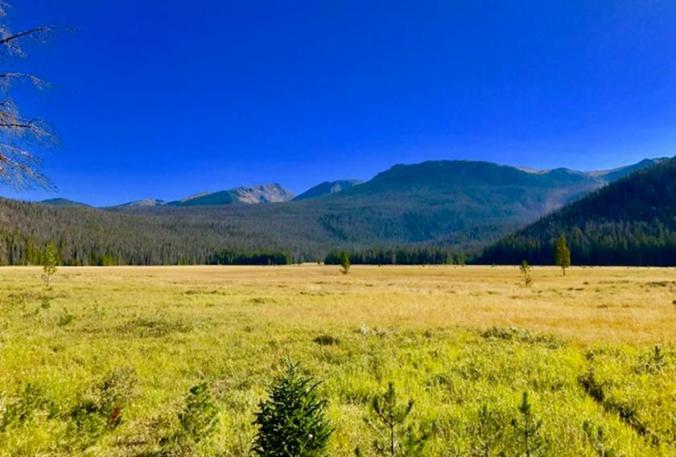 I met a couple young fellows on the trail and basically asked them if they thought I was going the right direction. They agreed I was on the right track. Turns out most of the people I met, and presumably most of the cars in the parking lot, belonged to those who had hiked in to campgrounds for a night or several.

The first half of the hike was pretty uneventful and not terribly scenic. But once I reached Onahu Bridge which was, surprisingly, an actual wooden bridge, the trail got much prettier.

The trail criss-crossed Onahu Creek for the remainder of the hike.

I passed a half dozen other hikers that morning, not exactly as busy a trail as I expected. But I never felt unsafe and I enjoyed my solo hike immensely.

2 thoughts on “Hiking the RMNP”