Gulf Shores, AL to Crawfordville, FL – October, 2017 We took three days to get to Gulf Shores, Alabama from Missouri. We didn’t watch any news during that time as at each stop we were either too tired to set up the satellite or there were trees blocking its reception. There was not much over the air TV available at any of our stops either.

When we finally reached Gulf State Park Jim set up the satellite and the first news report we heard told us about Hurricane Nate. We had reserved 5 days at this Alabama state park. But it looked like we were only going to get to enjoy two.

The good news was the next day was our anniversary and at least we could stay and enjoy it before leaving the following morning. Exactly one year before we had tried to celebrate our anniversary on the Atlantic coast and had to divert to inland Florida instead and wait out Hurricane Matthew. We’re thinking this is a sign and maybe we should spend future anniversaries in the mountains.

Gulf State Park is huge and it has a lot of new facilities since being rebuilt following the last major hurricane to come this way. There are 25 miles of trails and three large lakes. My sprained ankle was still healing so I wasn’t able to enjoy any long walks.

I reserved what stamina I did have for the beach. The park has 3 miles of beautiful beaches with several access points. The beach is 1 ½ miles from the campground so it’s a perfect ride if you own a bike or it was a short drive for us.

We enjoyed some wave watching and wading since the surf was pretty high. Then we had a lovely lunch beachside at The Gulf. We then headed to the park’s pool in the afternoon for a swim.

The campsites were about $40 per night for full hookups. It was pretty reasonable for all that the park offered. I liked that they didn’t nickel and dime you either. Parking at the beach, swimming in their pool, and access to their pier (which we didn’t have time to see) were all included in your camping fee.

We loved this park and hated to leave. They did refund us our camping fees when we chose to leave on Friday. I believe they shut the park down on Saturday.

We moved north of I10 and east a hundred miles to a camp near the town of Defuniak Springs, Florida. We found a park by a lake with a pool. Sunset King Lake RV Resort was a nice place for $35 per night.

The town of Defuniak Springs was pretty interesting and about a 10 mile drive from camp. It is built around a spring fed lake that they say is perfectly round and exactly one mile across. The town was organized in the 1880’s by the railroad and has an adorable train station.

It became the center of activities for the newly organized Florida Chautauqua Association in 1885. I had never before heard of Chautauqua but learned that it was an adult education movement that was very popular around the end of the 19th century and thru the mid 1920’s. It brought famous speakers and performers to the town each summer and so the well to do built second homes here so that they and their friends could enjoy the festivities.

There are many beautiful, mostly Victorian homes built here. It was a shame I couldn’t yet walk far as we would have really enjoyed walking these streets and seeing the many fine homes. We explored as best we could in the truck.

After our first day of exploring we hunkered down to watch and wait out Hurricane Nate. We were well out of harm’s way but it was still pretty wet. The park had a lot of things blown around, like trash cans and portable awnings, but no real damage.

Our next reservation was at the Florida state park, Topsail Hill Preserve, just east of Destin. We were supposed to go there Sunday and Monday but they shut down for the weekend and refunded our fees. So we finally got back to our planned itinerary on Tuesday when we headed for St. Andrews State Park.

This park is an oasis in the middle of Panama City. You drive through the city and onto the St. Andrews Peninsula and it’s like the city isn’t even there. It’s 1,200 acres of sand, sea, and swamp. The swamp is actually quite beautiful, especially in the morning light. 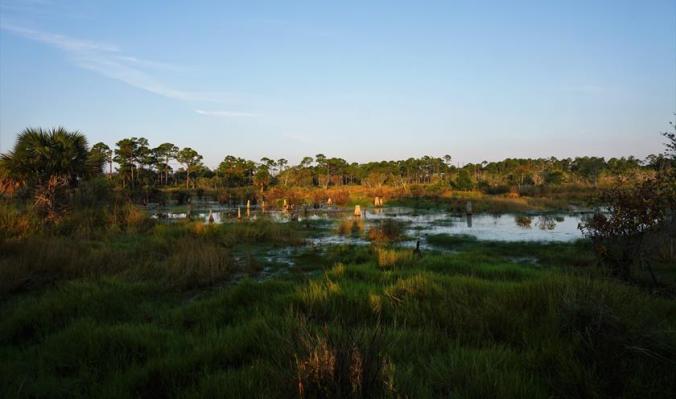 And there are tons of deer. They are a bit on the puny side. I imagine it’s a tough place to live.

This was the view of the bay from the back of our campsite. We had a tiny private beach and lots of water birds, crabs, and bunnies for neighbors. We loved our three day stay at this gem.

I finally started to be able to walk a bit farther and hobbled down the beach each morning. The sunrises were amazing. 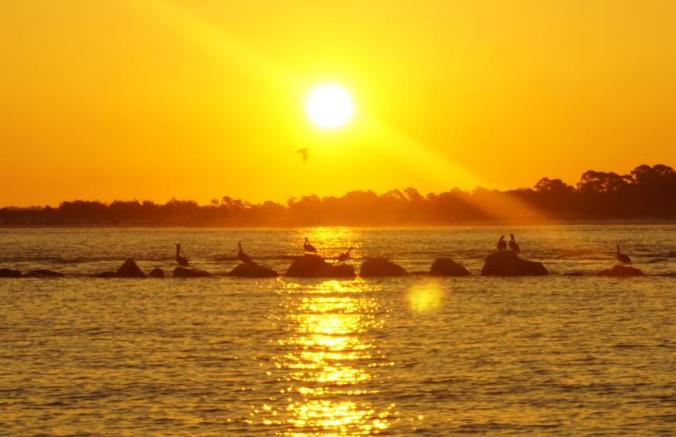 The boating channel just beyond the sea wall was very busy at sunrise and it was neat to watch all the boats race out.

There is long jetty that the fisherman seemed to enjoy despite the signs warning to stay off it.

The seas were still pretty rough our first morning and got calmer as the week wore on. Here is the view of the park’s pier at the end of their beach and Panama City Beach beyond.

The park has a lovely protected bay.

One morning we went for a long swim after our walk and had the whole bay to ourselves until about 10 am. We went back that afternoon and snorkeled along the outer edges of the bay where the rocks are piled up to just below the water’s surface. It was fun but awfully crowded.

We vowed to take our snorkels the next morning but on that morning’s walk the beach was littered with tons of large jelly fish.

We finally did snorkel our last morning before we packed up and left. We saw a few jelly fish but were able to swim around them. We enjoyed some large schools of big fish, a few tiny but colorful fish, and one ridiculously large crab.

This park is a pretty special place. We were lucky to have snagged our weekday reservation but we had to get going on Friday. The site was around $30 with electric and water.

It’s often hard to find any place to stay on Friday and Saturday nights when you are in popular areas. We looked for some place along our route where we could wait out the weekend and stumbled across Newport Park, a county park along the St. Marks River. It was 10 miles to the nearest town of Crawfordville.

After lunch we visited the St. Marks Wildlife Refuge. There was a $5 fee per car to enter the refuge and during our Friday afternoon visit it was collected via a self-pay station. We drove the 10 mile road through the refuge to get to the St. Mark’s Lighthouse, the second oldest in Florida.

I am not terribly excited by lighthouses. They’re OK but unless you can get inside one and climb it, I only have mild interest in them as interesting subjects to photograph.

I was under the mistaken impression that the light house was open and was a little disappointed when it was not. It did turn out to be an interesting drive through marshlands with lots of birds and one alligator.

The next day we planned to explore more of the area but after a morning trip to Crawfordville for provisions Jim wasn’t feeling well so we spent a quiet day in our weekend refuge. The camp was a good choice even though the sites were laid out a bit chaotically. It was $27 per night for full hookups which was payable by cash or check only.

We pulled out early Sunday morning as we were very excited to get to our next destination. I am equally excited to tell you about it in my next couple posts.