Goodland, FL – December, 2017 We now owned a boat and the perfect place to anchor her. Unfortunately for the first month they were an hour apart. This didn’t matter because Bella Vita spent that month on the service rack at the boat house in Bonita Springs.

As I mentioned in my first post about Bella, we considered the Garmin’s depth gauge the most important piece of equipment on her, and it didn’t seem to be working. We had taken her out a few times since we got her but without knowing our depth we were only comfortable retracing our route out of the inland waterway and heading straight out from shore a few miles. These trips were awesome but to explore more of the coast we had to know our depth.

We decided she needed a new GPS. Installing it entailed installing a new transponder under the boat and THAT required getting her out of the water. We figured we might as well have a mechanic look her over and give her a tune-up while she was dry.

Luckily the guys that ran the boat house were super helpful and offered to haul her out and put her on their service rack.

They also recommended a great mechanic who was willing to look at her the next week. We had them pull her out the day before and finally got a good look at her hull for the first time.

We were actually quite pleased with what we saw. It appeared to be in good shape.

The mechanic came the next day and the tune-up went well. He had only positive things to say about her inboard Mercury MerCruiser engine. He did voice some concerns about the outboard portion of her motor. This gunk was covering the whole back end.

Apparently that is not what that is supposed to look like. This little fellow was actually living in the outboard.

He recommended cleaning her back end so that we could get a good look at what we had to work with. Since we had closed on the house and were busy working on it AND we had no idea how to get all that muck off her, we hired a professional with the right tools and experience to do the job.

Then we met the mechanic there to look it over. Long story short, we ended up replacing the entire outdrive. And yes, that did cost a little more than what we had paid for her to start with.

We knew we were taking a gamble when we bought her. She’s still worth at least what we have invested so no worries. And now we have a boat in good working order and Jim knows what she needs to keep her that way.

The initial tune-up, cleaning, and inspection took about 2 weeks. Then ordering the parts and doing the major repair took another 2 weeks. So after a month on the rack they finally put her back in the water and called to tell us she was ready. We couldn’t wait to bring her home!

The trip was about 50 miles and we couldn’t leave the dock at low tide so we had to wait until almost 2 in the afternoon. No problem, that still left us 4 hours of daylight to make what should be a leisurely 2 hour journey. We ordered a Lyft to drive us to the boat and were pleasantly surprised it was just $50 for the one hour drive.

We got to the boat yard, settled up with their office, fired our girl up, and put some gas in her tanks. It was only 1:30 and the tide wasn’t quite as high as we liked but we were raring to go. Jim pushed the trim button to lift the prop a bit and we cautiously headed for the pass.

We could almost see the pass when it happened. We heard a loud kuh-klunk! Then felt an awful vibration.

We pulled over and stopped to consider our options. We could limp back to the boathouse. But neither of us wanted to go back there. We finally proceeded to the inland side of Delnor-Wiggins Pass. There is a pretty nice beach there with large sandy shallow area and relatively good visibility.

We dropped anchor in 3 feet of water and jumped off to assess our damage. As we suspected we had lost a chunk of our propeller. One of her three fins was about an inch short. We also realized during this stop that the trim button wasn’t working.

I phoned our mechanic to ask for advice. Could we drive her home that way or would it do further damage to the outboard? Or could they meet us somewhere nearby or on our way south to make the repair?

They said their guy could meet us at a public boat park in Naples and assess if there was any more damage besides what we had found and repair the trim button if possible. We headed out to open ocean and south about 15 miles. The good news is the vibration from the prop stopped when we reached about 18 miles per hour.

We met the mechanic and he insisted the trim button was working when he tested it a few days before. He checked it out and found some erosion on a cable that appeared to be the issue. He cleaned it and got it working then raised it to have a look. Everything looked fine except the prop.

We headed out of Naples’ Gordon Pass about 4 pm with around 30 miles of water between us and home. Everything pointed to us being able to make it home before dark but we were extremely anxious. We hadn’t even tested the boat’s lights yet as we had no intention of being out after dark.

Jim took us a couple miles from shore and gunned it to 25 miles per hour. This was fine until we passed Marco Island. Then our options were to take one of the passes north or south of Marco Island or go well past Marco and around Cape Romano.

We weren’t keen on trying the passes before and our time crunch didn’t make them any more appealing. When we thought we had all afternoon we had planned to give Cape Romano a wide birth. Now I found a route on the charts that just skirted the cape and looked doable.

It was strange passing the tip of Marco Island and continuing away from civilization and toward the open ocean as the sun sank lower and lower. 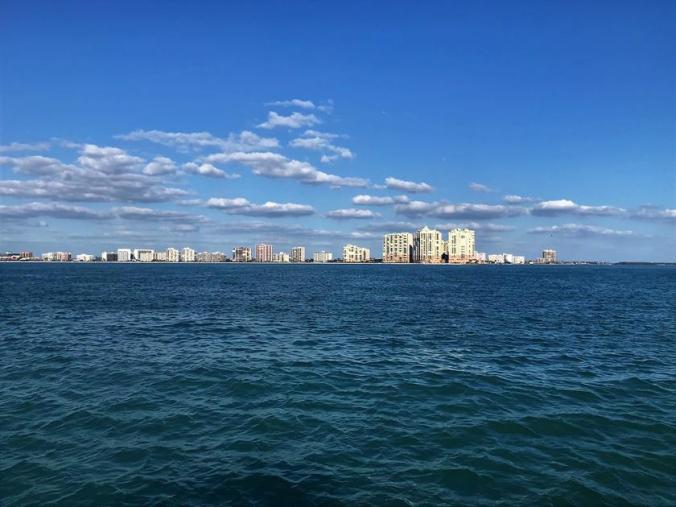 Once we reached the cape the water looked like silk and was unbelievably beautiful as it reflected the now purple sky. 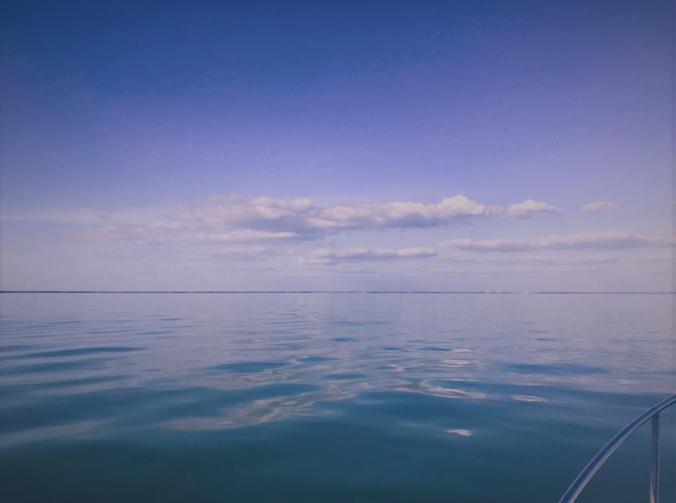 We had to slow way down and watch our depth gauge closely as we passed between the shoals. This route took us through one section the charts said was only 2 feet deep. That’s about the minimum we can scrape through but it was now high tide so, as we hoped, it never got below 3 feet. The depth increased from there and averaged around 5 feet for the remainder of the trip.

There was not a single other boat out which didn’t exactly make us feel any safer. We weren’t totally alone though as we were joined by several dolphin. One dolphin hopped in and out of the water a half dozen times. It was like he was a rock being skipped across the water’s surface. Amazing!

Of course we tried to appreciate the beauty around us but were distracted by our concern over the setting of our only source of light and our complete unpreparedness for being out after dark. Jim was concentrating on the water in front of us and his depth gauge. I was studying the chart and comparing it to our location on the GPS.

Our weather app said the sun would set around 5:40 and last light would be about 30 minutes later. We weren’t sure just how much light we would have in between. Jim was really getting concerned until he realized the only glasses he had brought were his sunglasses and once he took them off about 5:45 things were a whole lot brighter although a little blurrier!

We were elated to finally see Goodland in front of us as the sun sank behind us.

We breathed a huge sigh of relief as we pulled into the canal that led to our back door. There was still plenty of light when we arrived home just after 6. We did the bare minimum to secure the boat and headed to the house for a much needed cocktail. By the time they were mixed and we stepped back outside to check on our baby it was completely dark outside.

One thought on “Bringing Bella Home”