Marco Island, FL – April, 2018 Jim has been wanting a recumbent bike for many years and the last couple he has been actively looking for a used one. He wasn’t willing to pay much over $500 and he was pretty picky about the style of recumbent. He hadn’t seen a single one for sale that met his criteria and was even worth test driving until now.

I saw a bike in his price range that looked like what he wanted on Facebook Marketplace when we were in the Keys. He looked the model up online and it had great reviews and seemed to be exactly what he had been looking for. It was in Key West which we were planning to visit that week anyway. We made arrangements to see it, rode it up and down their street, and finalized the deal for only $400.

We took it back to Fiesta Key and took turns riding it around the RV park the next few mornings. It was everything he hoped. It was easy on his knees and back which is what has kept him from enjoying biking for many years now. What he got was The Rover by TerraTrike. They start around $1100 new and his bike would have cost about $1500 with all the extra options it included. Here’s a pic I borrowed from their website.

He’s owned it a bit over a month now and is loving it. We’ve been riding almost every day. We generally ride a minimum of 5 miles, 7 to 9 miles is not unusual, and our longest ride has been 15. So what, you may ask am I riding. 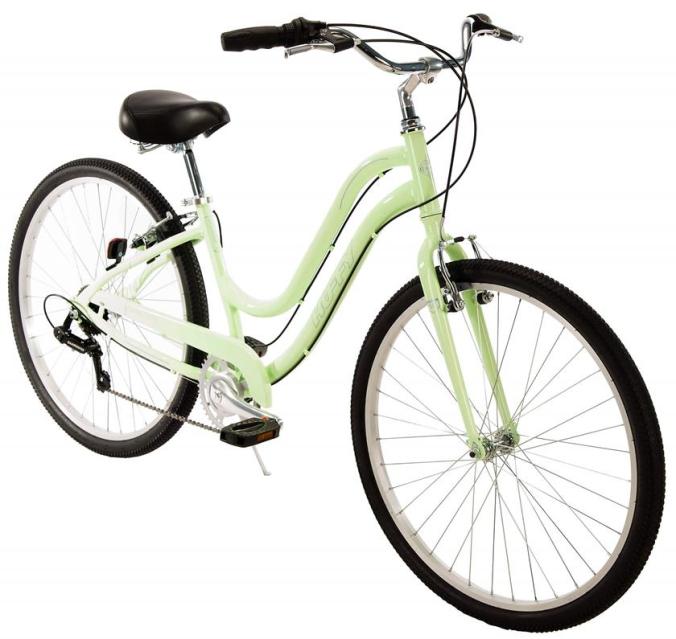 We had a couple of cruisers we had picked up at a garage sale last season and they were fine for riding around Goodland but not what I’d like to spend hours on. I had some idea of what I wanted and after a little internet research I found it in what they call a crossover or hybrid bike. I wanted to sit upright on a comfortable seat like the cruiser, but I also wanted some gears.

I did not want to spend a lot of money either. If we ended up riding a lot then I could always upgrade to a better quality bike later. Most of the bikes I saw online that fit my criteria were around $250 but I finally found this one for under $150 at Walmart and the reviews were pretty good. It was in stock near our home so we picked it up the next week and I have been extremely happy with it.

My most common form of exercise up to this point is a three mile walk. If I walk every single public street in Goodland it adds up to just over 3 miles. So I have walked every street over and over during the last 6 months. I enjoy these walks and usually see something new each time. I really enjoy walking very early in the morning because there is hardly anyone out and about before 9.

There is a nice, paved walking/biking path from town, along Goodland Drive that leads to the highway. I usually don’t include this path in my morning walks but if we ride every single street in town and take the path to the highway we can get just over a 5 mile ride. Our typical ride looks something like this.

There isn’t much elevation gain on the city streets and only about a 10 foot rise in elevation from town to the highway. So to add a challenge I’ve been turning onto the highway and peddling to the top of the bridge. There is very little traffic in the mornings and there is a very wide shoulder.

I’m a little embarrassed to admit how hard it is for me to get up there. But with the exception of my first attempt, I have made it every time without stopping (even though Jim said it looked like I was going so slow near the top that he was afraid I might fall over).

Jim has started joining me on the bridge. He’s at a disadvantage on the recumbent because he can’t put his weight into it. It’s all legwork for him whereas I can stand up if the going gets tough. He also has much smaller wheels but the same number of gears as me. Our goal for next season is to be able to go all the way over the bridge and then back up over it thereby adding two climbs to our usual ride.

Whether I walk 3 miles or ride 5 miles, it’s about 50 minutes of exercise and I’m burning a similar number of calories. Of course, that is the minimum amount of exercise I try to fit in most days (try being the operative word). The bikes are making it easier to reach that goal and also helping us do more than the minimum.

Jim often walks with me but walking up and down the same streets just doesn’t appeal to him. He enjoys biking them so much more. And it is much easier to exercise every day when you’ve got someone that’s excited to exercise with you.

Also when biking we create our own breeze. Therefore we are willing to bicycle when it is too hot to walk. And we can bike when there are some bugs about without being feasted on as we would if we were walking.

It’s a lot more interesting to ride somewhere new so a couple times a week we’ve been loading the bikes up and going in search of new trails. Luckily we have some great options in this area. One of our favorite trails is the Gordon River Greenway in Naples.

It has several parking areas but our favorite place to start is by the Naples Airport. There is a park there beside the runway and they have a platform where you can watch planes come and go and even listen to the tower on a loudspeaker. You never know what you might see there.

Then you can ride about a 5 mile loop that swings past the Naples Zoo and crisscrosses the Gordon River.

If you want to wrack up more miles you can add 5 by continuing past the parking lot and all the way around the airport and back.

One goal we set when we started riding was to return to Shark Valley in the Everglades National Park and ride its 15 mile loop before we left Florida for the season. Four weeks after we bought Jim’s bike we did just that.

They don’t open the gates until 8:30 so we arrived just after that time on a Monday morning. It was already 78 degrees out so we hustled to get on the trail which begins along the canal. We weren’t very far along before we were swarmed by bugs and I started to wonder what we were getting in to. There were a variety of buzzy things but the most annoying was the biting flies. Luckily that was the worst area we went through and it got better as we rode on.

During our last visit we hadn’t seen any bugs but we anticipated there being some this time and were wearing bug spray. Jim is usually the one the bugs love most so he had applied it more liberally than I did and surprise, surprise they didn’t bother him nearly as much as me. Unfortunately, when we stopped so I could apply more the can ran dry. Lesson for the day: always carry spare bug repellent in the Everglades.

The bugs were just bad enough that I didn’t want to stop to take pictures for fear of being swarmed. So we put the first 5 miles behind us pretty fast. As we were nearing the observation tower at mile 6 I finally got it out in hopes of seeing the crocodile that we saw last time. She must have been sleeping late as she did not make an appearance this day. There were plenty of alligators though.

And there were quite a few birds, although not as many as in April. 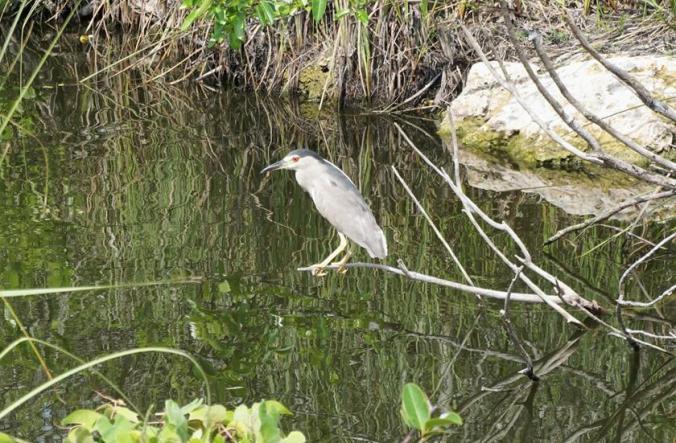 We climbed the tower and lingered there for a while. It was cooler up there and shady. There were no bugs and very few people. And it was nice not to be rushed as we had been when we took the tram tour last time.

There were tons of alligators in the pool below the tower this time and we had seen very few here during our last visit.

We finally drug ourselves away when the first tram tour of the day arrived to break our peace and quiet. We still had 9 miles to go.

The park prefers you ride the whole route counter clockwise, opposite of the trams which are the only other traffic allowed. We could have returned by the same route if we had needed to thereby reducing the day’s total miles to 12. But we were feeling pretty good and up to the challenge.

As we road on we found out why the alligators were now at the pond under the observation tower. The area that had been covered in water during our April visit was now mostly dry. We still saw a few smaller gators and several babies around the drainage ditches where the last of the water remained. There were some larger ponds, mostly a ways from the road.

The good news was that there were far fewer bugs on this side of the park. Unfortunately there was also zero shade. We got lucky and had some occasional cloud cover on the return trip but if we stopped we lost our breeze and it was too hot to stay long. We had intended to make it a leisurely day trip. We had brought a lunch and plenty of water. Instead we pressed on and finished in just over one and a half hours not counting our intermission at the tower.

We are looking forward to taking our bikes on the road with us this summer. Jim found us a rack for the RV that will carry them both. We are already planning our route and stops based on finding good bike paths.