Santa Rosa Beach, FL – May, 2018 When we passed through this part of Florida last October we were really looking forward to visiting Topsail Hill Preserve State Park. Unfortunately our reservation was summarily cancelled when Hurricane Nate made an unwelcome visit to the area the day before we were scheduled to arrive. Even though it was a little off of our planned route this trip, we decided to make the detour and spend a couple nights there.

We arrived an hour before the park’s 1pm checkout and were told they had not yet confirmed if our site was vacant. They directed us to park in their large day parking area and check back with them in an hour. We parked, had a quick lunch, then unloaded the bikes to have a look around.

and the many lily pads growing in them. Their blooms were quite lovely.

Soon we were set up in our new home and, most importantly, plugged in to the power grid so our AC could work overtime to get our little tin box comfortable. The sites here aren’t overly large but they are big enough and thoughtfully laid out.

The rain that was in that afternoon’s forecast kept getting pushed back so we gratefully took advantage of the beautiful day. After a short rest we donned our bathing suits, threw a couple things in a bag, and headed for the beach. The beach is about a mile from the campground or from the day use parking lot. It is perfect for bicycling to or they have a tram that runs from 9 – 7 daily.

We arrived at the beach to find it fairly busy with families enjoying their Sunday afternoon. 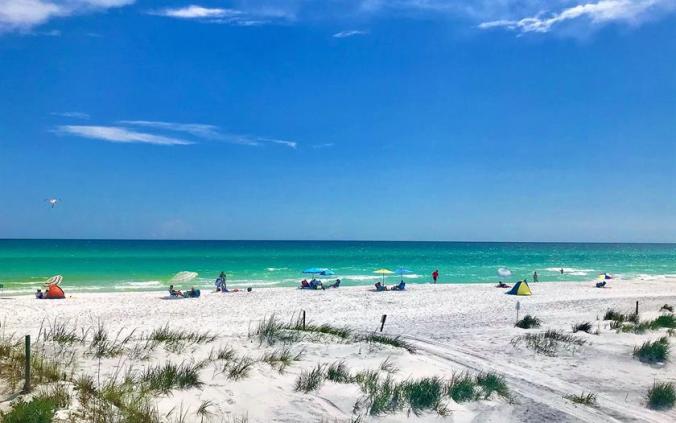 The sand was at a premium but there was plenty of room in the water and all we cared about was getting our saltwater fix. We threw our bag down and plunged right in. The yellow flag was up so there were some pretty good sized waves we had to work our way through. But we finally got out to 4-5 feet of water and just bobbed around for a while.

The water was a deep shade of green and the perfect temperature. The only negative was little green globs of, I don’t know, seaweed? They were everywhere. That’s ok. We persevered long enough for our bodies to soak up their quotient of salt.

Some dark clouds were moving closer and we heard some thunder so we decided we better head for home. I was glad we weren’t stuck waiting on the tram. We jumped on our bikes and made it home just before the clouds let loose.

We were both looking forward to a good ride the next morning. A very popular trail starts across the highway from the park and travels 20 miles along Scenic Hwy 30-A. Unfortunately Jim’s trick knee had pulled one of its shenanigans the day before. He wisely decided he better let it rest.

I took a ride around the park. Primarily I wanted to take the paved trail to Campbell Lake. It was only about 3 miles roundtrip. 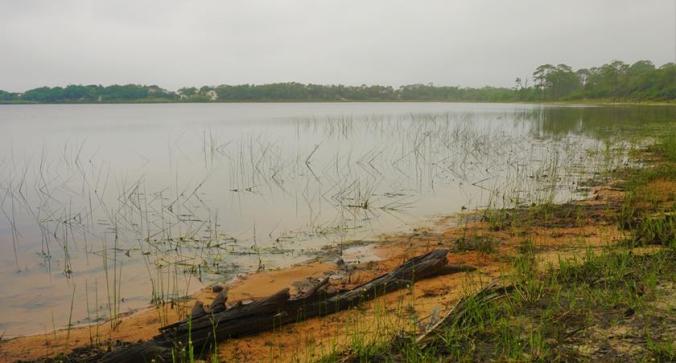 The lake is a rare freshwater coastal lake. It’s hard to see in this picture but the other side of the lake is actually a tall sand dune that protects it from the ocean.

The morning was pretty dreary and it was misting the whole ride. I kept hoping it would clear up and I’d get some better light for my photos. It didn’t.

Turns out it was pretty comfortable riding conditions so I kept going. I rode every stretch of pavement in the park, about 5 miles worth. I stopped at the beach and walked down the boardwalk.

The beach was now deserted.

Then I road most of the park again to complete an hour’s worth of morning exercise.

The rest of the day turned out cooler than expected, which was nice. We drove east a ways beside the bike path we had hoped to ride and found it was very congested in places and we probably wouldn’t have enjoyed it anyway (sour grapes anyone?). Jim wanted to visit a bike shop called Big Daddy’s. You can tell they are serious about bikes. 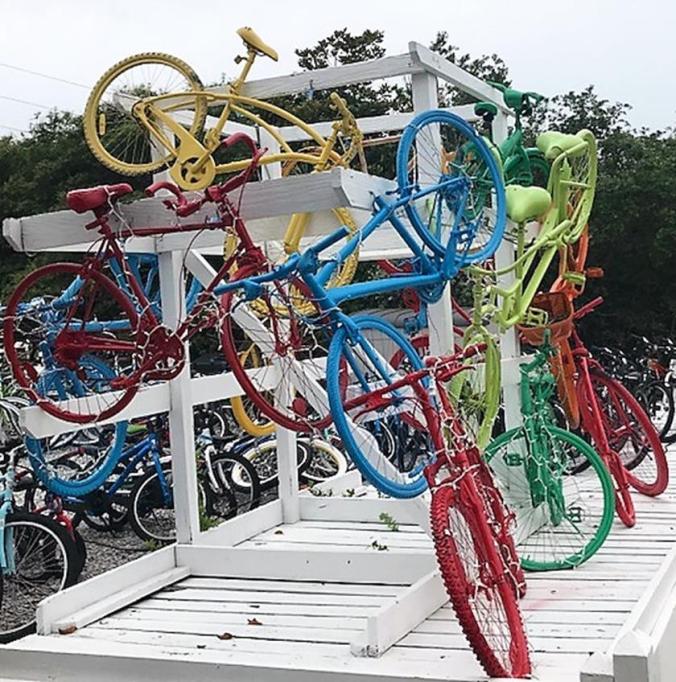 Then we explored the area to the west of the campground. There were tons of retail options in this area. There were high end shopping centers and a huge outlet mall.

Even though we didn’t need anything, roaming some of the strip malls was a good way to get in some walking and we always had a place to duck in out of the heat or the rain, depending on what Mother Nature chose to throw at us from one hour to the next. The easy walking was what Jim’s knee needed to keep it going without further straining it. Hopefully he’ll be back in the saddle by our next stop.

One thought on “Topsail Hill Preserve”