Knoxville, Tennessee – August 2015 Knoxville was another town we had simply passed through several times. We were very intrigued by our brief visit here and plan to stop regularly when we are in the area or possibly spend a week here someday.

Our first stop in downtown Knoxville was the Old Gray Cemetery. We enjoy visiting cemeteries for their history and beauty. This one was full of both, and quite possibly our favorite. It was founded in 1850 and was well planned. It is full of wonderful stonework. Like these beauties:

And this little lady watching over the grave of an 18 year old girl: 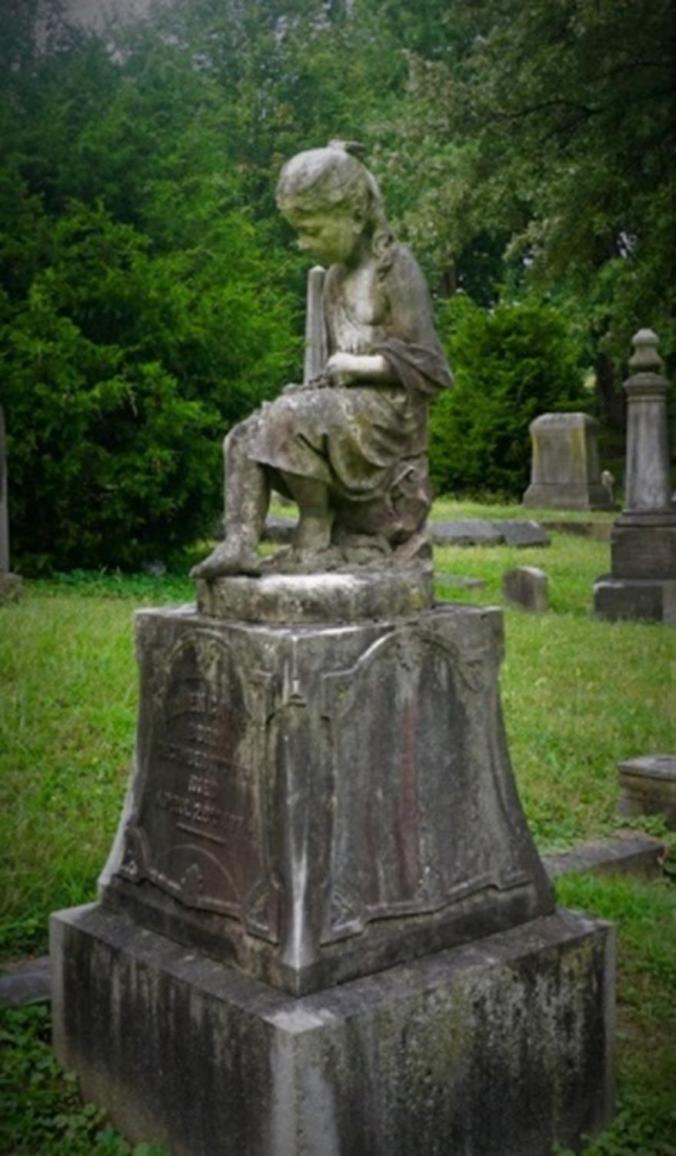 Across the street from the cemetery was this absolutely gorgeous church:

We stayed less than an hour because the bugs were eating poor Jim alive. No see ums, tiny mosquitos… I’m not sure what was lurking out there but Jim was spending more time swatting and itching than enjoying so it was time to go. We’ll visit again with some bug spray in our arsenal.

Our next destination was Market Square. The reviews I read were somewhat lukewarm about this area so I was pleasantly surprised by what we found. The square and the surrounding streets had block after block of beautiful old buildings. 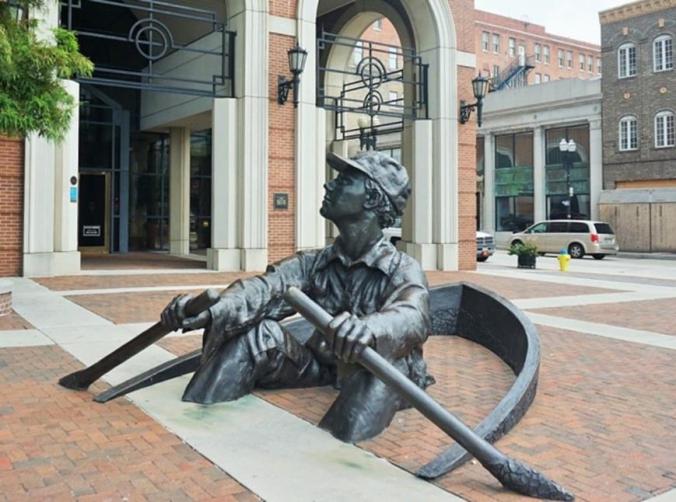 We visited on a Saturday so there was a very nice farmers’ market to boot. I was impressed by the variety of vegetables. These farmers didn’t just have tomatoes, but many varieties of tomatoes large and small. Other vegetables were equally well represented. We found a variety of corn on the cob that we often can’t locate.

We were thinking about grabbing a light lunch at one of the many food trucks when it started raining. We reconsidered and instead started looking for a restaurant. Our first few choices had long, wet lines so we chose to visit the first restaurant that wasn’t too busy. Based on its lack of clientele we didn’t have very high expectations for Soccer Taco, a Mexican sports bar. Were we wrong! We were very impressed with the food and the service. The prices were very reasonable, $20 for two meals and an amazing appetizer.

The rain turned to a light drizzle so we continued to explore. As luck would have it we had arrived on the day of the East Tennessee Historical Society History Fair. This included so many events that we didn’t even realize how much we had missed until we got home and read the brochure. We did see some great musicians on the square courtesy of the event.

We took advantage of a free bus tour of historical homes. We hopped on a bus downtown and they dropped us off at several locations. Another bus would come along and pick us up every 20 minutes. We visited the Blount Mansion (I think they used the term mansion rather loosely here) and James White’s Fort, the founder of Knoxville.

Each were open free of charge when they are generally about $7.50. In each case I felt like we got our money’s worth but in all fairness I believe they usually include a guided tour in their price. We skipped the Mabry-Hazen home and Bethel Cemetery because our energy was flagging and it was still drizzling. I definitely want to see them on another visit.

Our final bus stop was at the Emporium Center, the home of the Arts and Culture Alliance. This stop promised us a glimpse into the Knoxville underground. We ended up enjoying this stop the most but not because the underground was particularly exciting. They had a great 15 minute presentation of how the underground came to be and the history of Gay Street. What was most intriguing was that the revitalism of the area has apparently occurred very recently and that so many downtown properties were all but abandoned just 10 years ago.

After a long and entertaining day we were happy to return to our camp just 13 miles north of Knoxville at Escapees Raccoon Valley RV Park just off Interstate 75 North. It was a pleasant little park with reasonable rates, less than $20 for full hookups after tax.

Nashville, Tennessee – August, 2015 I just couldn’t wait to get on the road again! We certainly had a ball in Missouri hanging with our gang and visiting with family but we were ready to see new sights. We were never so happy to see the Illinois border. Even happier to see Kentucky, and later the same day, Tennessee. We had to put some miles between us and the Missouri state boarder before we could rest easy. We decided to spend a couple nights in Nashville.

We had passed through Nashville at least a dozen times over the years on our way east to vacation or visit relatives. But we had never spent even a single night there. What a shame. We loved our visit and definitely intend to make it a regular stop on our future sojourns east.

We went downtown to Broadway and 2nd Avenue for the afternoon and had a great time. We love live music but are early birds. We think it is a coup when we find a band playing before 8 pm. On Broadway we found a dozen musicians playing at noon on a Thursday! We popped in to a half dozen bars, had a beer at each, and listened for a while.

I liked the Welcome to Nashville sign in the Tequila Cowboy bar. The gentlemen playing, Wesley Cash, was my favorite of the musicians I heard that day. 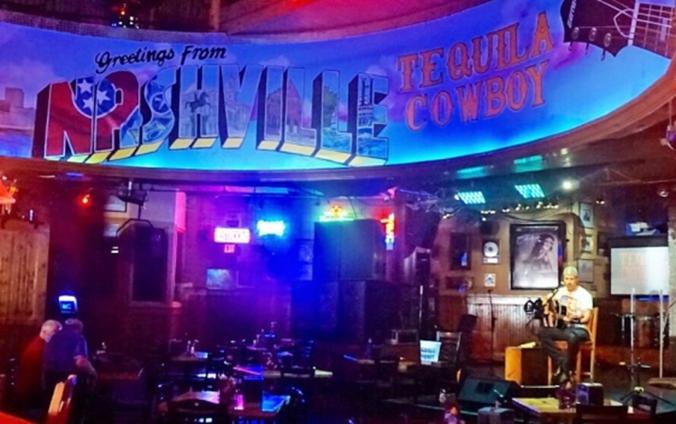 Even if you are not a country music fan you should definitely consider a visit here. Roughly half the music we heard was country, although it IS really hard to tell these days. The musicians were playing plenty of pop and oldies and took a lot of requests.

After several stops (read beers) we needed to walk it off so we turned on to 2nd Street. It had lots of shopping and some bars but clearly wasn’t the main attraction. We walked up to the county courthouse and Public Square Park. Everywhere we looked this city had wonderful architecture. I was entranced by this building with its multiple gargoyles. 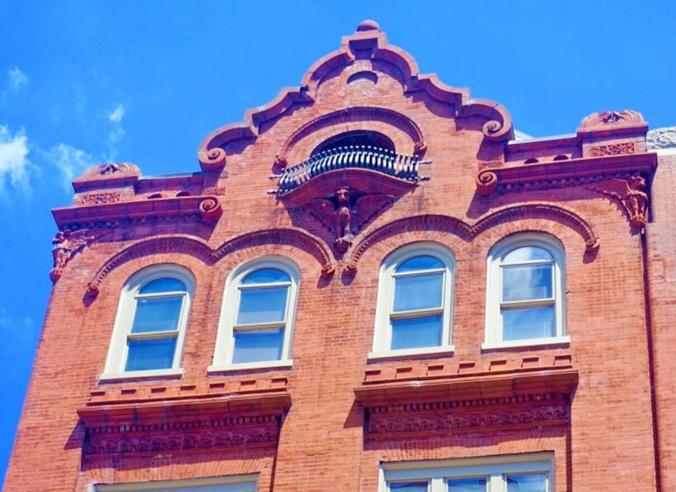 I understand this area is not even considered Music Row. There is a lot more for us to explore on future visits. Only a block over, the Cumberland River ran through the city. We will definitely spend more time at Riverfront Park on our next visit. But after a few hours it was time to head back to camp.

We loved our campground. We stayed about 15 miles east of downtown at Seven Points Campground on the J. Percy Priest Lake. I was surprised to find this little gem could actually be reserved online the same day of arrival. In fact, if you show up here without a reservation, you have to call recreation.gov to secure a spot. This worked very well with the way we like to travel. I hate to commit to a place when we are a couple days out but despise driving around looking for a first come first serve sight. The site cost $20 per night with electric and water and there was no additional reservation fee.

The sites were spacious and long. Ours, number 47, was one of the harder ones to get in to as it was very narrow and not at a good angle to the road. But we have maneuvered into much worse. For only a few dollars more, and with a lot better planning, you can get a lakefront site. Here is a pic of the swimming beach. On either side of it are sites that extend down to the water and people had their watercraft and assorted water toys tied up at their sites. 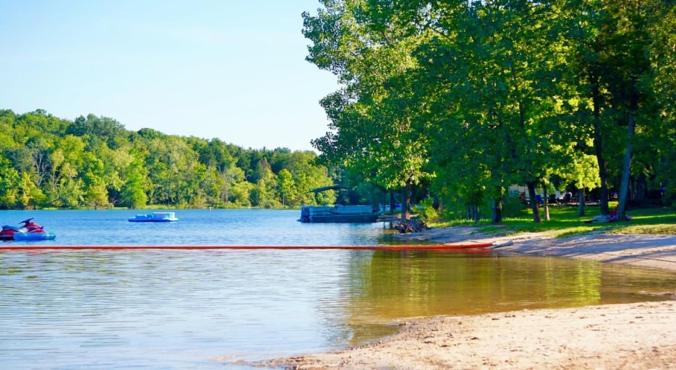 It was a very quiet park with the exception of our first night when we awoke to a terrible racket at 2 in the morning. At first I thought our neighbors were moving at an ungodly hour but once fully awake I realized it was much closer. I had put a small bag of trash, mostly glass, in the back of our truck when leaving our last campground and forgot to deposit it in the dumpster. Jim was scrambling to get dressed so he could go do battle with the critter when I remembered a warning I had read when making the reservation that they had a problem with skunks getting in to things. I conveyed this info to Jim and that slowed him down a bit. We briefly debated whether a skunk could climb into the back of a truck. Then he started looking for a flashlight so he could see what he was getting in to. By the time he found one the noise had stopped and we gratefully put the debate on the back burner until first light. Impossible to say what actually got in to the trash but they were likely sorely disappointed by the lack of food in there.